Pocketbooks - Flight Paths (How Does It Feel to be Loved?) 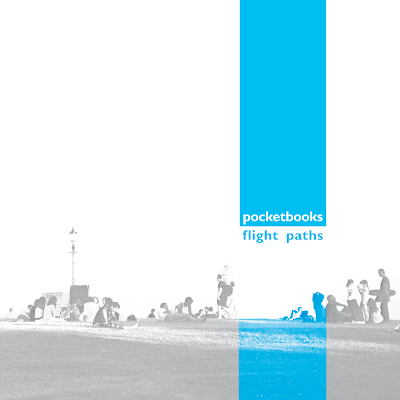 As I get older Mondays are becoming harder to bear. Weekends away with friends you see briefly and should see more and brought into sharp contrast with a Monday full of tetchy emails demanding things of you should've done on Friday afternoon, but were too excited. Because you were going away to see friends you see only briefly.
This Monday is no better than any others, but it's different because I've come home with a copy of Pocketbooks' superior debut album. Pocketbooks, as I'm sure you're aware, are probably the best live band in England right now. And if Flight Paths is anything to go by, they're probably the best band on record, too.
Half of these songs are familiar to me; they've been a staple of Pocketbooks' live set for a year or so now. And yet you can still get a thrill from the delicate pop rush of Cross the Line - a song so jubilant that all those nights watching this band come flooding back, and then... AND THEN!... there's that bit where Emma sings: "When you know the last word's mine", and you, well, you just nearly start crying and punching the air, so something equally as flamboyant.
But Pocketbooks have other brilliant songs, of course. Like Fleeting Moments, which fair scoots along, and sounds a little bit like something off The Housemartins' second, superior album. Or Sweetness and Light, which is the kind of whimsical melodrama that Pocketbooks do so much better than anyone else at the moment.
Maybe whimsy is too twee a word. 'Cos Flight Paths is packed with the sort of every day, kitchen sink detail about life, relationships, London life, holidays away and break ups. Heck, Every Good Time We Ever Had lists most of them explicitly.
Remember those albums you listen to when you're laid on the floor of your bedroom and you've just done something completely life-changing? Or you're just about to? Well, this is one of those. Listen to Flight Paths, and go out and find the one you love.
Posted by A layer of chips at 15:16