Interview with Stuart from Indietracks 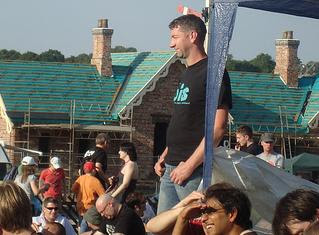 Those of you who haven't seen the line-up for Indietracks yet would do well to have a look. It's the best line-up of any festival ever.

I'm led to believe that the Indietracks team is in the process of confirming headliners AS WE SPEAK, so I thought I'd try and wangle some information out of Stuart, who put the first Indietracks event together back in 2007. I failed, of course, but here's what he had to say.

Does putting the festival together get easier as each year passes?

Not normally as as we've developed and grown there's always been new things to deal with. But this time as we're sticking pretty much with what we had last year, just different bands to arrange.

When do you start contacting bands?

The Specific Heats were offered a return slot a few minutes after they left the stage last year, so that'd probably be the first. I would randomly bump into bands during the year and offer them slots, then forget about it till they remind us when all the slots have been filled. I'm Mr Disorganised.

Is the railway still enthusiastic for the festival each year?

It's still the highlight of their year. Probably as it's not a train-based event (for them) and everyone is so nice.

Has the festival reached a tipping point regarding attendance now, do you think? Or do you want to get steadily bigger?

The railway felt that 2009 was big enough for them. I'd like to drop the bigger names with the associated hassles of dealing with booking agents so we'll probably shrink keeping the core indiepop crowd, although not everyone in team indietracks shares the same view. They're getting their way this year.

How do you choose which bands will play?

There's no easy answer to that, there's so many different threads that all come together and are dealt with in different ways - bands that we've seen or heard we like, bands that approach us, overseas touring bands and the headliners. The rest of the team (I wasn't involved in band picking this year) got together in January and drafted a schedule and start confirming slots with the bands.

Why did you drop the Christmas gigs?

Getting people to Derbyshire in December for a three band show wasn't working, numbers were falling to the stage it wouldn't work (it was probably a revolt against us using the tw** word!)

What's been your favourite Indietracks moment of the last four years?

Probably getting to go home at the end of each weekend.

Who would be your dream headliners for the three nights, if money was no object?

Pocketbooks, The Smittens, and Ballboy continually playing Day In Space for the whole weekend.
Posted by A layer of chips at 13:03