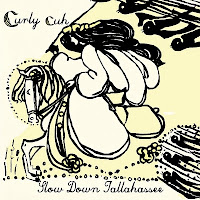 Back when I was out of work for three years, I'd have given anything for the job I have now. Back then, surviving on £35 a week dole money became a day-to-day challenge just to clothe and feed myself. Now, I can just about manage both of those things, but some weeks you wonder what day it is, never mind when it will all get easier.

Luckily, I've had Slow Down Tallahasee to keep me company this week, else I might have completely cracked up. The band's posthumous second album, 'Curly Cuh' is just the sort of delicious dark pop that I needed this week.

If 'The Beautiful Light' was snotty, knowing pop at its best, then 'Curly Cuh' is its world-weary, cleverer, more downcast older sister. That's not to say it's all doom and gloom, but there's a certain sense of an ending throughout the tracks.

When 'Curly Cuh' is at its most sparce it draws heavily from pioneers such Young Marble Giants, but its perhaps the likes of the alluringly maudlin 'Knees As Sweet As These' - a sort of 21st Century re-working of The Waltones' 'She Looks Right Through Me'. The songs sits at the heart of the album, and hits the spot on so many levels that it's hard not to replay it straight away, just so you can exclaim again: "Shit! That's right!"

Death, in one form or another, is revisited throughout the album. On 'Saturday' in particular there's a sense of finality, and so it comes as no surprise, upon listening to the record that this is the band's last album.

Some of the best days and nights of the last few years have been watching or listening to Slow Down Tallahassee. Sheffield is a poorer place without them, but with 'Curly Cuh' they've left a mighty, mighty epitaph.

'Curly Cuh' is available now to pre-order on CD in a gatefold digipack with immediate digital download from Thee SPC.
Posted by A layer of chips at 20:03