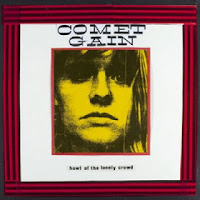 Reports of the death of Comet Gain have been greatly exaggerated. That’s the first thing that hits you when you listen in awe to the first three minutes of opening track ‘Clang of the Concrete Swans’ – a tribute to the lost, disenfranchised, downright downtrodden. Like the best Comet gain songs, it’s a rallying cry for those on the edge of society, and finishes with Feck imploring: “Let their howling hearts be heard.” It’s five minutes of pop majesty that brought tears to these eyes on my way to work this morning. My defiance is my number one, though…
And just when you think it doesn’t get any better than that (and you’d be forgiven for that), there’s the indiepop northern soul of ‘An Arcade From the Warm Rain That Falls’, another tale of the futility of modern life. But again, Comet Gain offer us hope after all. These are songs about belief and hope as much as they are about the daily drudge. And that’s why this album is so special, really.
If you want tearjerkers, then ‘Howl of the Lonely Crowd’ has ‘em. ‘She Has Daydreams’ reminds me of my dear, departed Tompaulin; or the spoken word beauty of ‘A Memorial of Nobody I Know’; or perhaps The Saddest Song Ever in ‘In a Lonely Place’, with it’s story of short-lived love affair and the almost too beautiful “I was born when she kissed me/I died when she left me” lyric.
And there’s the footstompers – there’s always the footstompers. Try the metallic rush of ‘Yoona Baines’, or the frankly funky ‘Herbert Huncke, prt 2’. Or maybe you want to pure pop of ‘Thee Estatic Library’, which sounds a little bit like The Fall at their poppermost. But with better singing.
Their live shows over the last few years might have been sketchy (at best), but when Comet Gain can hide themselves in a studio and come up with something like this – an album easily as good as their ‘Realistes’ masterpiece, then you can pretty much forgive them for anything.
The music will save us.
Posted by A layer of chips at 18:49