Kids are (more than) alright 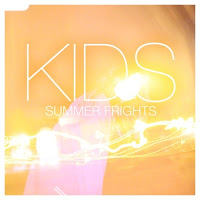 Pull yourselves together, slack-jawed tweescum - Indietracks is over, and whilst it might've been The Greatest Thing to Ever Happen to you, there are other treats out there too.

Take, for example, San Diego's Kids whose 'Summer Frights' album has lifted me out of a post-Indietracks, ongoing work benny at times this week. At times this records reminds me Architecture in Helsinki's 'In Case We Die' (a record that became the soundtrack of a pretty amazing summer of 2005 for me), and at others they remind of that just-about-to-keel-over pop fragility of The Deirdres. But with more guitar solos.

'Hidden Hills' is straightforward sunny pop, whilst 'Blind Eel' and the title track manage to be both tricksy and simple at the same time, and the singer sounds a little Eux Autres. In fact, quite a lot like Eux Autres.

'Melt' is perfect garage pop, with a cute little organ in the background, and then 'Further' carries on that theme with scratchy guitars and an energy you last had when you were about eight years old.

'Summer Frights' ends with a pretty faithful rendition of The Ronettes' 'Be My Baby', which is very sweet.

You can buy and download 'Summer Frights' here. Consider yourselves perked up.
Posted by A layer of chips at 17:13