Bart & Friends - Stories with the Endings Changed (Lost and Lonesome) 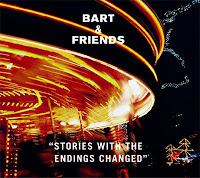 Having finally settled down after another sporadic bout of John Fenty-hating, work has taken over about 18 hours of my day once again. I've been working on my own for nearly six weeks now, and it's beginning to take its toll. I've got the worst spot I've ever had in my life on my bloody chin, and I actually had a dream about a venture capitalist the other night.

So, it's at times like this that you need a record to take you into its arms and give you a great big hug. Luckily, I've had Bart and Friends' 'Stories with the endings changed' to do just that for the past month.

This record is lots of things. On the surface it's a straightforward pop album of sweet nothings. But, to me, it's been like a best friend for the last few weeks. Like last year's 'Make you blush' it's intimate and homely and instantly recognisable - even when you're listening to these songs for the first time.

They music here meanders - but in a perfect way. Pam Berry is gone from this album, and in comes Mark Monnone and a cast of thousands (well, seven) to create an at times, almost country-ish sound. Monnone's hand is all over this record, and his influence can be found on just about every song, but especially 'When I've Got No Choice', 'There's no place I'd rather be', and 'Tomorrow will be better than today'. But look to the credits and it's all Bart Cummings' own work. More of an indirect influence then.

And then you skip to track one and start all over again, of course. Thank you for being a friend.
Posted by A layer of chips at 20:43