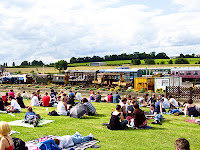 You know we always say, in a moment of reverie late on the Monday night after the festival, how Indietracks gets better and better with each passing year? Well, they've already really gone and outdone themselves this time.

I make no apologies for simply cutting and pasting the press release below. Suffice to say that the Slumberland stage is perhaps the greatest thing to have happened to me since last Indietracks.

LOOK AT THAT LINE-UP!

Indietracks Festival is to collaborate with American indiepop label Slumberland Records for this year’s festival, due to be held on July 6-8 in the grounds of a picturesque 1950s steam railway in Derbyshire.

Allo Darlin and Veronica Falls are amongst the first bands to be announced as part of the partnership with Slumberland Records, who will help curate the outdoor stage. Other Slumberland artists confirmed so far include C86 legends The June Brides, Tender Trap, Evans the Death, Gold Bears and Sea Lions.

Other bands announced today are Bart Cummings (with Pam Berry of Black Tambourine), Tigercats, The Hobbes Fanclub, Language of Flowers, Colour Me Wednesday, Orca Team, Doggy, The Sunbathers, and The Birthday Kiss. Further bands will be announced shortly.

Mike Schulman, founder of Slumberland Records, says: "When we were asked to help curate this year's Indietracks festival we were delighted! Indietracks has a global reputation for supporting a diverse range of top-notch indiepop bands, and their aesthetics are right in line with ours. We've long looked forward to bringing some Slumberland flavour over to the UK, and Indietracks is the perfect opportunity."

Allo Darlin began as a vehicle for the solo songwriting exploits of Australian Elizabeth Morris, who moved to London in 2005 and began performing and recording as “The Darlings”. The band extended their line-up in 2009, became Allo Darlin, and released their self-titled debut in 2010. Regularly championed by BBC DJ Steve Lamacq, they have variously been described as “classic indie pop” and “fully formed talent at the first attempt”. Their second album Europe is due to be released on Fortuna Pop! and Slumberland Records later this year.

Veronica Falls are a four-piece indiepop band comprised of former members of The Royal We and Sexy Kids, formed in 2009 in London. Their self-titled album, released in 2011, was met with widespread critical acclaim on both sides of the Atlantic from the likes of BBC6 Music, Clash, The Guardian and Pitchfork.

Over 50 indiepop bands will be playing at the festival across four stages: the outdoor stage, the indoor stage, the church and the steam trains themselves. The festival will also host a range of art and craft workshops and a selection of discos after the bands finish.

This is the sixth annual Indietracks festival, which takes place at the Midland Railway in Ripley, in the heart of the Derbyshire countryside. The site houses a whole range of lovingly restored steam diesels and locomotives. Festival goers are allowed to have unlimited rides on the steam railway over the weekend and full access to other railway attractions including a farm and museum.

I'm going to the shed to hug my tent until 6 July. See you there.