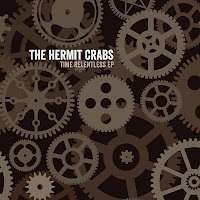 I never really thought the Hermit Crabs got the credit they deserved when they released those two eps and daintily understated album between 2006 and 2009. Alas, it's too late for that to happen now, as this is a deceased band, and 'Time Relentless' (a rather apt title, if you think about it) is, I hear, the band's last release.

It's a very perfect way to go out, mind, with 'On The Spectrum' hinting at danger, and the title track nudging at a greatness few other acts would let die. 'Stop This Now' (the clue is always in the question, isn't it?) sounds like The Icicles, and I miss that band so much.

Last track, 'So Blue', is where The Hermit Crabs exit the stage, I guess, and it's a particularly heartbreaking way to leave. It's about helping out a friend through a hard time and whilst it never really lets itself go, it's probably best for that. The last thing we want here is an ill-placed explosion of strings.

And so, ta-ra The Hermit Crabs - a band that never really fulfilled (in popularity terms) the promise shown by that exquisite 'Feelgood Factor' ep in 2006, but who were around long enough to be important in my life. Lost treasures are sometimes the most precious.

You can buy 'Time Relentless' from Matinee Recordings.

Hi, a friend directed me to this today. The Hermit Crabs are still going and will be releasing more music in the not too distant future. Thanks for the kind comments.