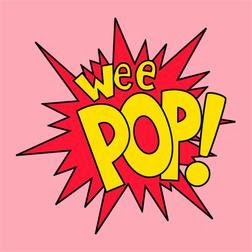 You may well have heard by now that weePOP!, the label renowned for putting our lovingly-packaged three-inch CD albums and singles, is about to close. Sad times.

But before it all stops for good, Camila, who runs the label, is going to release 3 more records - one by Let's Whisper, one by One Happy Island and one by Colin Clary; and they're doing a Kickstarter campaign to raise funds to help that happen. It ends this Wednesday, and they've already reached their target, but there's nothing stopping you adding a few more quid, is there?...

In light of weePOP!'s passing, I spoke to Camila about the label and the three final releases.

So, why are you ending weePOP!

There isn’t one reason in particular. It just felt like the right time to do it.

Rewind: why and how did you start weePOP? Was there a definite ethos behind it?

I started the label with my friend Thorsten back in 2007. It was a particularly vibrant and exciting time for Indiepop in the UK, there were gigs happening pretty much every much every week and new bands, new promoters, new zines and new labels popping out of everywhere. With so much great music and energy going about, it was hard not to want to get involved and do something as well. The idea for the label came about at an Apples in Stereo show, while waiting for the band to come onstage. Less than 2 months later, we had our first release!

The DIY ethos was always there. In the same way that a lot of the music we were into was being made in people’s bedrooms, we hoped we wouldn’t need a huge operation to make something others would like too.

And we wanted it to look and feel personal as well. From our very first release, the packaging has been highly handmade and we were pretty particular about the fact of it being limited and numbered; but  then some other aspects that ended up becoming part of the ‘weePOP signature’(like the little brown envelopes) just naturally happened over time.

What has been your favourite release?

Ahh, that’s a question I could never answer, it’s like being asked to pick one of your children. Every release was special in their own way, and we’re proud of every single one.

Five, the double LP covers compilation we did for our 5th anniversary was a particularly fun project to work on. The whole thing is made up of weePOP bands covering songs previously released on the label, so we got to be in touch with most bands we had worked with, all at the same time. It was great fun, and it couldn’t have been happier with now it turned up.

And your best memory?

Oh, there are so many good memories – sitting on the floor at the Bush Hall at that Apples in Stereo gig (when we decided to start the label); going down to Cambridge to the see The Roadside Poppies (the first band on the label) play; our 1st year anniversary gig, in fact, there are a LOT of great memories from a lot of shows!

I could give you a really, really long list here.. but I guess what we will always hold dearest is all awesome people we met, and might not have done if it wasn’t for weePOP..

How hard is it to finance putting records out now?

Most of our releases were very small runs on 3” CDs, which don’t require a big investment and is a very easy way to get music out in the world; but vinyl is a different story.

It’s not cheap to produce, postage always works out expensive, not everyone has a record player and you lose some sales because of that; so it needs a bit more planning; but it’s definitely feasible, and worth it - nothing beats the feeling of putting a record you already know so well on the record player for the first time!

Were you wary of Kickstarter before you decided to go down that route for these final releases?

I wouldn’t say ‘wary’, but we did explore a few options.

Because all 3 final records were to be released on vinyl, and with very close release dates, it would have been very difficult to finance them without some sort of pre-order system.

I had used kickstarter as a backer before and I like the way it works, so in the end, it did seem like the route to take.

What are you going to be doing next? Will there be another label in the future?

I have no plans of starting another label right now, but we never know what the future holds. I think (and hope) I’ll always be involved in DIY projects in one way or another.

I started a mail order & distro for independent comics with a friend earlier this year, and that has been great fun as well. For those into indie comics as well as indie music, it can be found at www.impossiblebooks.com.