Slum of Legs: a modern Iskra 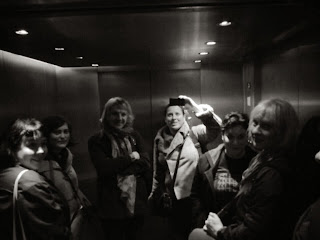 Back in the early '90s I was writing a fanzine here in Nottingham. Thinking back, it was a pretty desperate time; living in a mice-infested flat with no running water in the bathroom and 70 quid to live on a fortnight (this has gone a bit Four Yorkshiremen, but bear with me). However, a few things made it worthwhile...

Tapes in the post. Tapes from all over the world. Demo tapes, promo tapes - all full of rough edits of glitterball songs covered in the dirt of DIY production - which often made them better, it has to be said. Listening to the Slum of Legs demo tape immediately slings me back to those freezing cold days in Radford, when only the music kept me warm.

Slum of Legs are from Trendy Brighton, and have a member of The Chemistry Experiment and an unknown number of Blue Minkies among their number. They make lo-fi soul music that claws at your heart, and their three-track demo tape is a proper winter warmer alright. These songs drip with a passion you rarely hear these days - this is the pop underground kicking back, the sound of defiance in cruel times, the very essence of indiepop (although I doubt they'd welcome that term).

It's a shot in the arm for a scene struggling a little after five years of the best times. If this demo can inspire a new generation of indiepop bands then it'll be even more than just a fantastic demo tape. Here's the spark - you do the rest
.
Posted by A layer of chips at 08:39