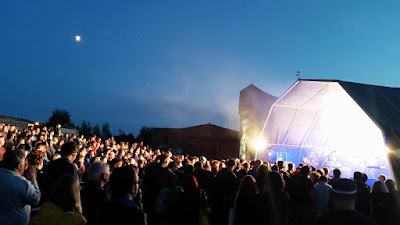 Sure, you want to know what spurs the Indietracks organisers on towards arranging the best music festival in the world, don't you? Now you can.

Is this the 10th Indietracks? How has it changed?

Nat: Yes, this year is our tenth weekend festival and we're all very excited to be celebrating our birthday with the railway this year! It's changed a lot since the first Indietracks, which was a one-night event back at Butterley station back in April 2007. Then, there was just one stage at Butterley and three bands playing. We've since moved the site to Swanwick and have around 50 bands playing over the course of the weekend.  There are now four stages, including the large outdoor stage which we introduced in 2009 when we partnered with Elefant Records, and we've also expanded our range of catering stalls, introduced workshops and increased the number of discos.

The railway staff are also absolutely brilliant and try to introduce something new every year which we're always very grateful for - for example the outdoor beach, the steamroller displays, the owl sanctuary and guided tours of the museum. They're really keen to help us improve the festival, and always surprise us with a lovely new feature every year! This year we're also especially looking forward to showing a beautiful 30 minute documentary about the railway and Indietracks made by award-winning director Jeanie Finlay, which was filmed at Indietracks last year.

Is it more and more of a challenge to find bands, or are you pleasantly surprised this year?

Ian: The bands find us! I'm always pleasantly surprised by the applicants each year, bands that have fallen under my radar or I've just never heard of - every year throws up some gems. I think the scene is wide enough for us always to be able to select a varied line up of new bands, established bands and a few reformed legends too. I guess it's the headliners that are always the challenge, it's so important to get these right and the field is a bit narrower for these slots. We've got a pretty long list of wants for the headline slots though and we definitely ticked off a couple this year with Saint Etienne and The Aislers Set - we've been after those two for years! Generally speaking I think the indiepop scene has evolved a lot in the last five years and we want Indietracks to move with it, not be stuck in the past. That philosophy means we are never in short supply of bands to choose from.

Andy: Haha, it's actually all very friendly! We try and make sure that we have a varied (and hopefully sometimes surprising!) selection of bands, so it helps that everyone in our team brings different ideas. There are plenty of spots to fill, so we can all be happy. The invitation process runs all year around, especially for the headliners - sometimes we're in touch with bands for years before the timing is right for them to come and play. We're especially excited to have Saint Etienne and The Aislers Set this year, as we've loved them for ages. We also invite bands to apply, and spend most of January listening to 400-500 applications and picking our favourites - there's a few amazing new bands on our first announcement that we discovered through the applications process. We also look at the Anorak wishlist, spot bands at shows and try and pick up on what people are excited about.

Is there anything new in store for this year's festival?

Marianthi: Same old, same old, I'm afraid. The best bands, the best beer, the best friends, the best train rides, the best way to set yourself up for the revolution: by believing in the good in things. Indietracks is full of sparkly surprises every year and we are as dazzled by them as you are.

Indietracks came about partly because of a disillusionment with larger events. Do you think these larger events have made any concessions to cater for different music tastes or those without huge budgets, or are they lost forever?

Alice: Going to any festival big or small is an expensive affair, but thankfully now there are so many different events out there that you can find your little place in the world. I think the idea of a 'Festival' has changed so much in the last ten years, and people want a curated experience. They want more than a stage, dodgy festival noodles, a stall to buy a dumb hat and a Carling beer tent. Most big events have to have a wide musical remit to attract the numbers they need, I used to regularly go to Leeds Festival in my sadly distant student days and would find enough bands that I was excited about.  But why would I feel the need to go to Leeds Festival now when I can go to a festival that fully caters for me?  I'm sure Reading still has some OK bands playing, but why would I want to go there when I can go to End of the Road, Festival Number 6 or indeed Indietracks?

How has the Midland Railway charity benefited from Indietracks over the last decade?

Andy: I think it's brilliant that the festival has introduced thousands of new visitors to the railway - a lot of people will come along to the festival because they love the bands, but will then really enjoy all the railway attractions; the steam trains, signal boxes, transport museums and miniature railway etc. The railway staff and volunteers work so hard to keep the charity going, so it's great to help attract so many visitors and that our audience really like all the railway side of the festival.

We're also the biggest annual fundraising event for the railway charity, and our visitors raise tens of thousands of pounds each year. This really helps with the cost of maintaining the site and locomotives, and also contributes to improvements such as the new Swanwick station building and the new bridge to the second platform. It's really expensive to maintain the railway, and the funds people raise by coming to Indietracks are vital in keeping the railway running - so thank you everyone!

When you're old and grey and sat next to Hidden Cameras in sheltered housing, how would you like Indietracks to be remembered?

Nat: Hee! First of all I'd pull out my dog-eared photograph of me and Joel Gibb being photobombed by a confused-looking owl, and ask him if he remembers much about that night, and whether he still has their glittery silver costumes! Seriously though, hopefully Indietracks will still be going when we're old and grey, but if not then I hope it lives on peoples' memories as somewhere that made them happy. That's certainly how I'll always remember it - it's my favourite place in the world.

Ian: That we succeeded at something people thought could never happen. That we did it for the love of the music and because we could, not that we were trying to dictate a scene or define it. That we probably paid for the Cheddar Valley owner's children to go to University. That we gave bands ignored by the radio and press the recognition and the stage they deserved. That we made people happy and gave them the some of the best weekends of their lives.

Alice: I can't really imagine it being over, I'd like to think it would still be running in some shape or form. I'd like to hope that with the company of Hidden Cameras I could forget about the shirtless dudes drinking Buckfast in the campsite disco. But sadly that unsettling image is etched into my retinas. I'd hope that people would remember orange cider, owls in the bar, can crush o'clock, drunken hangs in train carriages, llamas, the amazing and friendly railway staff and it being the centre of our little scene.


Marianthi: Part of me doesn't want anyone to remember anything, and just enjoy being serenaded by a still-hot Joel Gibb in our wheelchairs. Another part of me wants Indietracks to be remembered as something that spurred people on to be in bands, make stuff, put on gigs, think about community and inclusivity, fall in love, believe in the railway, believe in good. I'd like it to be remember as a place where it was completely OK to be yourself and you felt safe and happy and amazed. And never, ever forget the glitter cannons.
Posted by A layer of chips at 06:49