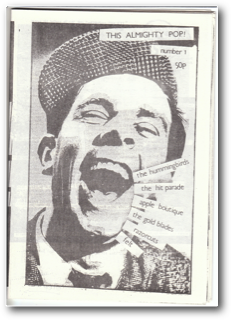 Many moons ago, in the early 2000s, there was a great band called Kosmonaut who put out a single on Matinee Records. Amongst their number was Stephen Maughan. Even more moons ago, Stephen was in a band called Bulldozer Crash with Marc Elston, who, as part of The Liberty Ship, put out a couple of singles and a quite beautiful album - also on Matinee. And even further back in the mists of time, Stephen wrote the best fanzine the world has ever seen. It was called This Almighty Pop!
This time last year Stephen decided to return from hibernation to do a new issue of TAP, and now he's got Kosmonaut back together for a gig with the legendary White Town, which is this Sunday in Newscastle. I suggest you go along if you're in the area.
In the meantime, Stephen's been good enough to answer a few questions from a trembling ex-fanzine writer who took more than a little inspiration from TAP. Here's his answers.
How long has it been since Kosmonaut played?
It's been 7 years, but we only ever played live twice back then, one was the gig that you promoted in Nottingham when we supported The Liberty Ship.
Why did the band stop playing?
I became a dad and the spare bedroom in my house which was our little home studio became my daughters' bedroom, so we decided to have a break for a little while, but we never got back together, until now.
What made you start up This Almighty Pop! again?
I just started going to more gigs and discovering lots of great new bands and it reminded me of the days when I first started my fanzine. I just fancied doing something again and the fanzine and label are it.
Were you surprised with the reception it got when it re-emerged?
I was because everyone has been really nice. It's like I've never been away, I've reconnected with lots of people who I was in touch with when I originally did the fanzine and lots of people who were too young back then to remember it have been very supportive.
What do you make of the current indiepop scene?
I'm really enjoying it, there seems to be a great new record released every week. I like the blogs that keep me up to date. I wish there were more real paper fanzines though, how come nearly all the new ones are written by girls?
You have quite strong views on certain aspects of the scene; where does your attitude towards Sarah Records come from?
I guess you're referring to what I wrote about them in number four of my fanzine? I still get hate mail about it now, well not quite, but people still tell me I was wrong to write it. In hindsight it was really nothing because they were such an important label and I do like a lot of the records and what they stood for. At the time though Matt's fanzine was my bible and I just couldn't believe he was doing stuff with Sarah that he had had a go at labels like Creation for doing, but really it was a storm in a teacup, still is, it was just how I felt at the time, twenty years ago when I was young and foolish.
Who are your favourite new bands?
Loads, but here are a few . . . Frankie and the Heartstrings, Les Cox (sportif), Blackflower, Lets Whisper, Horowitz, Pains Of Being Pure At Heart, A Classic Education, Play People,Withered Hand, Summercats... I better stop because the list in endless.
Are you still in contact with Marc Elston? He wrote to me the other day and said he's twiddling his thumbs - Bulldozer Crash revival?
Yes, we are still in touch, we are meeting up at Indietracks in a few weeks. We always talk about doing something together again which I would love to do, Jyoti even said he'd play bass for us again, but we never seem to get it sorted. We can't even blame the distance between us because we lived almost as far away from each other back when we were a band. Who knows, one day we might get our act together.
When Kosmonaut were around in the early part of the decade there was nowhere near the indiepop scene there is nowadays. Matinee and a few others, to my mind, were keeping the flame alive. Do you sort of cherish those more "underground" days, rather than everyone jumping on a tiny bandwagon?
Not really, I was just happy that somebody wanted to release records by us. So who are these bandwagon jumpers?
Oh, no comment... Will there be a new Kosmonaut record?
Well there is going to be an e.p. of 4 songs we recorded when we still had a studio. Cloudberry are releasing that. I don't think there will be any new recordings, nothing planned anyway, this gig is just a one off, although I really have enjoyed being in a band again.
Posted by A layer of chips at 16:36

Ah, good stuff. I managed to miss TAP! first time round but grabbed a copy of the last one and it's great, isn't it? Honest writing, full of love. Excellent!

TAP! was brilliant back then but it's amazing to have it back now and not just as little nostalgia trip. Thanks for opening my eyes to Withered Hand, Stephen!