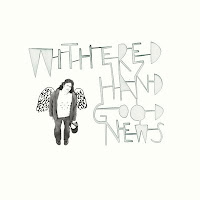 Lynsey and Marianthi and Andy and Pete have been mithering on about Withered Hand for a while now, and apart from hearing about a song and half on the radio I've sort of been too lazy to hunt anything down. So it was nice when Ed from SL Records got in touch and sent me a link so that I could listen to 'Good News', Withered Hand's debut album. And it's a rare treat.

The first thing you notice, of course, is Dan Wilson's voice, which veers between choirboy and complete emotional breakdown about fifteen times every five seconds.
The second thing you notice are the confessional, often quite funny, lyrics. 'Religious Song' tells (I think) of Wilson's experiences of organised religion, and is pretty hilarious without being all "hey maaannn, religion SUCKS". And so it's really quite clever and charming.
'I am Nothing' is particularly wonderful. As Wilson sings: "In the greater scheme of things/I am nothing" you can feel hundreds of broken hearts pounding along with his. And yet he somehow manages to turn his own feelings of nothingness around by the end of the song, and it becomes a celebration of being anonymous. That's quite something, isn't it? And that's what will turn Withered Hand into some kind of touchstone for everyone who relishes being the underdog, and like anonymity of a crowded city centre, or a busy pub, or a train ride. Because being anonymous means you've got time to write amazing songs like this, obviously.
I'm probably gushing a little too much. But in Edinburgh there lies, in Withered Hand, a thing of great beauty. 'Good News' means you can own a little piece of that. Lucky you.
Posted by A layer of chips at 14:04

'I am Nothing' is my secret Withered Hand song too. I've got to hide it from Pete in case he calls me emo again, but yeah, it's wonderful. Can't wait for that album.