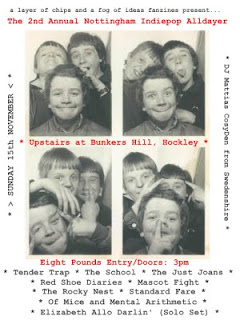 The venue is booked. The soundman is hired. The line-up is full. The Swedish are coming. 15 November might just prove to be the busiest gig I've ever put on, if you believe Facebook attendees. But then you really shouldn't believe Facebook for things like this. This much I've learned to my cost plenty of times.

T'other promoter, Andy, has whisked up this scampish poster, probably featuring him when he was in the first incarnation of the Bay City Rollers, some time back in pre-war Germany.
I'm talking rubbish, because the birth of my son has kept me awake for most of the week. Sorry. Hope to see some of you on Sunday 15 November at Bunkers Hill in Nottingham.
Posted by A layer of chips at 18:17

One evening wow gold a man was wow cdkeys at home watching TV and eating peanuts.pet clothes He'd toss them in the air, then catch them RuneScape Gold in his mouth. In the middle of catching one, Eve isk his wife asked wow power leveling a question, maple story mesos and as he turned to answer her,flyff penya a peanut fell in his ear. He tried and tried maple story power leveling to dig it out but only world of warcraft gold succeeded in pushing cheap wow gold it in deeper pet clothingHe asked his wife for assistanceffxi gil and after hours of trying they flyff penya became worried and decided to go to hospital. As they were ready 2moons power leveling to go out the door, archlord power leveling their daughter archlord gold came home last chaos money with her date.

I am not able to attend because my job's schedule, but I would have loved it! However, I always check the flyers they post on Facebook! Next time I expect to reply" I am attending" because it is worth a lot.