The Platers - The Second Between Spark and Flame ep (Indiemp3 Records) 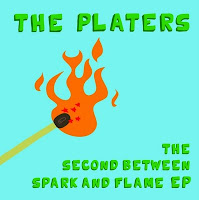 Tom from Indiemp3 seems quite excited about The Platers, a London-based band who namecheck most of the indiepop/C86 staples on their myspace page.

Indeed, there's an innate 80s miserabilism about this band. The title track of this ep is downbeat enough to appeal to the long coat brigade (is there still a long coat brigade?), whilst 'Unwise' doesn't do much to up the fun factor. But hang on, there's a hint of optimism in 'Let's Take the World Tonight, Jonny', which sounds like those other '80s heroes The Housemartins a little bit. Naturally, it's the best track here. 'Another Day' rattles along at a fair pace, too, but it's a bit too tricksy for its own good, whilst the stylish 'Down the Works' ends the record on a stubbornly downbeat note.
Here's something I've noticed over the last couple of weeks: the guitar album seems to be back in fashion. Okay, maybe it's a coincidence, but along with the impressive Hillfields album (which will get a review soon - promise) The Platers' ep emphasises some pretty nifty guitar shapes. And that's something I've not noticed for a while. Maybe indiepop is going through one its periodical serious phases. Maybe the next Hibbett album will be a concept album about early 90s Leicester.
Maybe not.
You can listen to 'Let's Take the World Tonight, Jonny' here.
Posted by A layer of chips at 09:03

Nearly - it's a concept album about an invasion of space dinosuars. Which is pretty much the same.

In other news: WELL DONE TEAM!