The return of the mighty Positions 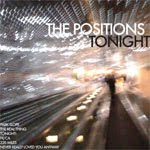 I think 1998 might have been the low point for music for me. Back then I was beginning to get into Six by Seven and thinking they were The Future. There was no good music about: FACT. The week consisted of working for around ten grand a year, then spending all my wages in a shithole bar in Grimsby or Cleethorpes. I might have gone two years without seeing a band.

All of that makes living in 2010 seem pretty ace, music-wise. Sure, David Cameron is Prime Minister and the Israel's state terrorism still sinks to lower levels than you thought possible, but - wait! What's that o'er yonder webpage? It's only the new Positions album, 'Tonight', available free on their bandcamp page until 29 June.
You'll be able to hear this straight away, of course, but let me tell you straight away that this easily equals the band's last album, 'Bliss!' which was - gulp - released way back in 2005. Which seems an awful long time ago now.
The horns are still there, and the killer stop-start bits that remind me of Architecture in Helsinki's 'In Case We Die' masterpiece. And The Positions still have that knack of writing songs that you think you've heard a million times before on the radio.
My current favourite (this will undoubtedly change) is 'HI/CA', which is the biggest tease ever - and only ever gets going with about a minute left, but it sounds like it'd be a great driving song, or something. If I could drive I could test this out, but maybe the bus is the best place for it tomorrow morning.
I digress!
For pure pop happiness it's really hard to beat The Positions. I remember when we were on holiday last year with Andy and Hayley, and we were on the way to Morecambe. We put 'Bliss!' on in the car and the countryside whizzed by in a haze of wonderful sounds and jokes about balloons (you had to be there). That's the sort of bon homie that The Positions exude. We're not going on holiday this year, but if we were, 'Tonight' would make the perfect soundtrack.
Posted by A layer of chips at 16:50