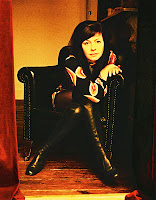 Talking of all things '60s, then it sort of beggars belief the new Fabienne Delsol album was recorded in 2010. It beggars belief in a quite tremendous way, of course, because her new album, 'On My Mind' is the sort of record that brings a smile during times when The Daily Mail is trying to tie women to the kitchen sink all over again.

Here's one woman that won't stand for it, mind. 'On My Mind' is as much about celebrating bring a woman as anything else. Recorded in the Toerag studios, what you get is the sounds of '60s girlpop with a distinctly melancholy twist. Delsol sings about love lost ('I Feel So Blue', love far away ('Faraway Spaceman Blues'), and love she plain doesn't want or need (the remarkable 'Count Me Out').
Elsewhere, things become distincly dark. Closing track 'Strange Shadows' is a pretty powerful, somewhat spooky epic torch song that ends the album on a stubbornly mysterious note. You want to know what happens next, you almost need to know that everything turns out for the best, but Delsol leaves you teased - primed for the next time, perhaps.
An autumn album, then, oh yes. But also one you'll probably still be playing next summer...
Posted by A layer of chips at 16:39

carn't wait to get my mitts on this... plus we get to go to the fab delsol/cee bee's 100 club show the weekend after next