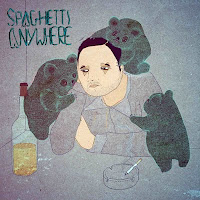 There are many, many bands out there who are raved about without must justification, sometimes for the fact they’re from London, or perhaps because they have a load of mates “in the industry”. Then there are those bands who are so deeply unfashionable, have a terrible name, and don’t go out of their way to be seen at all the places to be seen at. Hello, Spaghetti Anywhere.

The Spaghetti’s (as no-one is calling them) new ep ‘Doolally’ is a piece of mild-mannered, quiet genius, and it’s mostly about getting off your head, and the consequences. So, you have ‘Super special’, which is basically a slowed-down version of the band’s ace ‘Nice to be Nice’ track from a while back, telling the maudlin, tragi-comic tale of an alcoholic. Imagine a gentler version of 8-Ace from Viz. That may well flummox some overseas readers - soz.

‘Drugs’ is a variation on the theme, about a character who tends to take LSD, take his clothes off, and go for a walk outside.

Meanwhile, ‘Hulk’ is all about thinking you can take anyone on in a fight after a few pints. Come on, we’ve all been there. We’ve all turned into a bit of reckoner now and again after a good night out - Spaghetti Western are only saying what we’re all thinking.

I’d love for this band to be universally loved, but they won’t be, because of reasons I mentioned earlier. But they’re up there for me, whilst writing about those people down there. There’s a sort of wonderful symmetry about that.
Posted by A layer of chips at 16:41