Sometimes it does you good to look back at things and wonder how you got here. In fact sometimes, it's pretty much essential.

I've been listening to my first love a lot of late. The Cure were the first band I really, really fell for when I was about 11 years old. I'd made the leap from Shakin' Stevens to Elton John to Simple Minds and onto the Cure in about 18 months. Shakey just wasn't cutting it any more, and, to be honest, how he could he follow tracks such as 'This 'ole house' (the first seven inch single I ever bought), 'Green door' (the third) and 'Lipstick, power and paint' (I wasn't that fucking desperate). 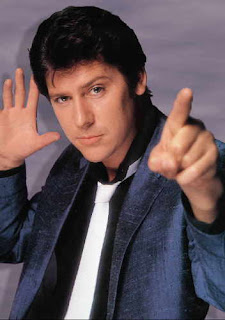 I cannot explain Elton John to this day, and even at that age, I remember being heavily disappointed with the 'Ice on Fire' cassette I received for Christmas.

Simple Minds I thought were Way Out There and weird and groovy - we all knew and know they weren't, aren't and never will be.

It was 'Lovecats', of course, that snared me. Who couldn't be seduced by that perfect pop single? I listen to it nowadays and it sounds like something from another age (which, I suppose, at 27 years old, it sort of is), but it still comes across as one of the most exotic things you'll ever hear. So, when 'The Head on the Door' came out I bought it with some pocket money, and played it to death.

You might think this sounds silly, but I still think 'The Head on the Door' is one of the most perfect pop records you'll ever hear. Sure, it sounds terribly '80s in parts (the brass on 'A night like this' is particularly telling), but me and few others started asking for 'Inbetween days' and 'Close to me' to be played at school discos, and we thought we were the bees knees, even though were all had mullets and were wearing those terrible flecked trousers that are probably dead cool now.

For the next five years The Cure, along with The Smiths (and for a horribly short time, The Housemartins) were my favourite band. I gulped back their entire back catalogue, straining to pretend that I immediately fell in love with 'Pornography' and 'Faith' and 'A Japanese Dream'; and never really listening much to the last side of 'Kiss me, kiss me kiss me'.

What's perhaps worse is that I started dressing like Robert Smith. Or perhaps a fourth division version of him. The hair was pretty good, but the rest of it left a lot to be desired. There was a distinct lack of decent goth shops in Grimsby in the late 1980s, and so I had to make do with a black and white paisley shirt from Burton, some black jeans from BHS and a pair of massive trainers out of Freemans catalogue.

I read 'Ten imaginary years' like it was my own personal bible, over and over again, and spent the summer of 1989 pretending I could draw and copying every Cure single cover out onto square bits of paper. Whilst the sun burned down outside, I listened to 'Seventeen seconds' on loop and pretended to be aloof and interesting by not speaking to anyone for two months. 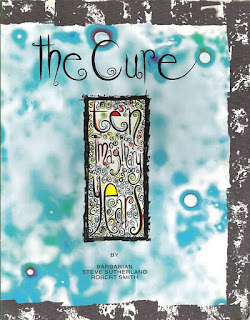 By the time of 'Disintegration'I was still clinging onto The Cure, but having my head turned by Ride's first three eps, which seemed more "now" and vital than a band that had been going for over a decade (and when you're 16 that seems an awful long time, doesn't it?), but I still took the day off work experience to go and see The Cure at the NEC in Birmingham, where we had the worst possible seats, and I bought the worst possible bootleg t-shirt.

Shoegaze beckoned and I dropped The Cure. I didn't buy another album, apart from the patchy 'Mixed up' double LP that came out in 1990. Sure, we all boogied on down to 'Friday I'm in love' in Gullivers every Tuesday night, but now bands liked The Family Cat, Lush, Kitchens of Distinction and Slowdive meant more to me than The Cure.

That I still listen to The Cure more than these other bands, though, must mean something. I just don't really know what. A case of not ever really falling out with your first love? Well, I never really loved Shakin' Stevens, I guess...

I just wonder if 11 year olds these days feel the same way about Bombay Bicycle Club. I hope so.

For your records, this is my favourite Cure song. It's overblow and pompous, romantic and dramatic. I was probably all of these things once. I'm only some of them now.

I can defintely relate to most of what you have written here, except the Shakin' Stevens and Elton John-stuff. I started with the brilliant combination of Elvis and a New Wave compilation that I played over and over again... ;)
The Cure entered my life around 1983, and at the same time I fell in love with Depeche Mode, U2, Simple Minds and Siouxsie and the banshees. Simple Minds WERE brilliant on their first albums, and songs on "Reel to real cacophony" and "Empires and dance" still amaze me with their unique sound. I have been "off" The Cure since "disintegration", which I didn't like very much, and I think my favourite albums are "The Head on the door" and "17 seconds" - and I have a weak spot for some of the songs on "Three imaginary boys". I have the albums up to kiss me kiss me kiss me on the music player on my phone now, and they still make my heart beat a little bit faster. I do however hope the band consider breaking up soon. The music they make today is in my opinion just repeating the recipe of the "The Cure Sound". Nothing new.

your title for this post had me on the floor. my brother was big into the cure i always thought they were a bunch of weirdos! I will be coming back to read more of your stuff. DIG IT!!

yep the cure were my first band like that as well, but the smiths took over within a few years. had the same thing happen as well, but instead of shoegaze it was stuff like SST, Dead Milkmen, and 7 Seconds before finding britpop. didn't get shoegaze until going back much later, however i loved the kitchens, sundays, and lush.