Standard Fare - Out of Sight, Out of Town (Thee SPC/Melodic) 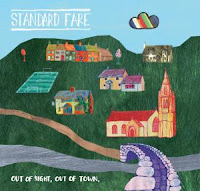 Ah, there were times back in the dim and distant past when you’d wear the vinyl through on your favourite albums, when you’d sit in your room with a pile of books whilst the other kids played outside, or smoked in the bus shelter, or went into town because they were brave and – apparently – knew how to have fun. And when the snowballs hit your bedroom window and you heard the catcalls and you knew you would NEVER go out again, you reached for the volume button, pulled the covers up a little higher and lost yourself in the music filling the air.

The songs that saved your life, and all that crap.

Perhaps the two things that make me wish I was 14 again this year have been the Help Stamp Out Loneliness and Pocketbooks albums. This is the third, and – I think – it tops the lot.

Standard Fare’s second album (let’s not shit about with the word ‘sophomore’, please) rips through your mind after half a listen. It’s what they call nowadays “viral”. It’s a masterpiece of three people coming together in the most perfect way and if they better this, then I’ll be surprised and wildly happy at the same time. Mind you, I thought they’d never top ‘The Noyelle Beat’, but they have. They have by some considerable distance.

What they’ve given us all here is a collection of songs that, whilst deeply personal to the band, resonate deeply. One listen and empathy, amongst other emotions happy and sad, will pour out of you.

It begins quietly with the deftly understated ‘Look for Lust’ before ’05 11 07’ grips your hand and chucks you into a train and straight into the middle of some kind of spontaneous romance. Time, then, for the dark skiffle of ‘Suitcase’ – a single so criminally ignored earlier this year (by me too). ‘Suitcase’ is remarkable for myriad reasons: the guitar performance of Danny How; the bounciest of all bass lines by Emma Kupa; the supposed-meaning of the lyrics; and how Standard Fare get around those lyrics by coming up with such a tune. It’s breathtaking.

‘Dead Future’ evokes the spirit of The Housemartins at their perkiest, whislt ‘Darth Vader’, right at the centre of album is Standard Fare’s most perfect moment so far. It’s only three and half minutes long, but it feels epic – a sort of gentle torch song which is either about a parent/child or adult/adult relationship, I can’t quite work out which, but I’m not really sure it matters that much – it’s just a beautiful song. 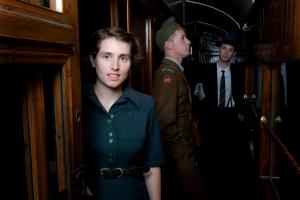 Enter How again with his guitar and the rattle and rush of ‘Bad Temper’ a complete and surely a future live favourite. Somehow, that’s topped by the hilarious ‘Older Women’ – a sort of ‘Some Girls Are Bigger Than Others’ for the 21st Century, it’s the best display of the sometimes sly humour running through ‘Out of Sight, Out of Town’.

Just when you thought you’d heard it all comes ‘Half Sister’, and it’s a reggae (that’s right) song about rediscovering a long lost sibling. A terribly serious subject, of course, but Kupa manages to keep smiling by asking a series of questions to the mystery subject of the song, such as ‘Do you like Steve Earle?’ It’s a remarkable song in many ways – not least the fact that Kupa is singing about this kind of thing “in public”, but also because it just throws you. It’s this light reggae song about discovering you have a sister. Where the fuck did that come from?

Closing is the wonderful Duane Eddy rush of ‘Crystal Palatial’ – a typical (and I mean that in a good way) Standard Fare paean to lost love, in which Kupa’s yearning is almost too much for her already fragile voice. There’s yearning here, and she means it. The rest of us better leave the room.

In many ways this is Danny How’s album, in the fact that the guitar playing on it is wizardly. Then you listen to Andy Beswick’s hammered out, second-perfect drums and you think he holds it all together. Then you go to Emma Kupa and you hear those elastic bass strings and THAT voice, and you think Standard Fare are all about her.

None of these things are true, though, because they’re just so very much a band - a gang, if you will.

Standard Fare, for just over half an hour, on ‘Out of Sight, Out of Town’ make the music that would’ve saved you from the tuff kids outside back then, just like this music will save you from the all that crap out there now. I think they call that “timeless”.

12th December is TOO FAR AWAY, dammit.

damn you for teasing us like that! I rang my local shop 2 grafs in and they had no clew when it was coming out