From the heart of Town 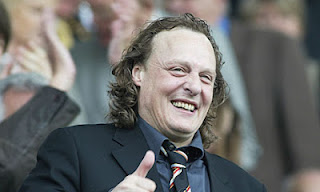 There’s been an awful lot written over the last 24 hours about the climax of the Premier League season – mainly about how it “couldn’t be matched for drama”, or it’s why we all love sport.

Let’s get a few things clear about yesterday’s games – most of them had little to do with sport or recreation. Under capitalism sport exists to make huge profits – that goes without saying. And it’s the working classes that pay the most to ensure that sport – and in particular football – continues to be big business.

We may like to think that we’re buying into our team when we hand over those notes and get a replica top every season, but of course we’re not. We see nothing back financially; there is no sense of deep-seated democracy in this action, more a sense of inevitability that you’ll carry on doing it, because it’s what you’ve always done, and you think it might – in some small way – help your club.

There’s certainly very little return emotionally on this transaction – especially if you’re a fan of the clubs outside the top four or five of the Premier League who actually have a chance of winning something.

And yet playing and watching sport is so important to us. As our working lives become more stressful (and that’s if you’re lucky enough to have a job), then taking part in these collective actions is a vital part of those smaller and smaller parts of our lives we can call recreation.

There was a very good tweet doing the round yesterday, that said: “I'm a City fan. I think we bought the title. It's within the rules. If you don't like it overthrow capitalism.”

Well, if you insist.

Under socialism the profit motive would be taken out of football forever. Seeing as so few clubs these days actually break even (a state of near virtual panic a by-product of making rash, expensive decisions to buy success), then you’d think most chairman would welcome this.

What’s more, the clubs should be democratically run with the board made up of the players, the club staff and the fans – in short, those that actually know what it takes to give something to keep the club running.

We don’t live in a socialist paradise, of course – not yet, anyway. So how can this happen? Fans can run the clubs tomorrow without any leap of imagination at all. Indeed this already happens with some success on and off the field at clubs like FC United and Chester FC, and should be a blueprint for all clubs of any size. It also makes “my” club’s supporters’ trust’s decision to simply give away a load of shares to its despotic chairman all the more frustrating. A chance well and truly wasted.

There needs to be an end to the passive involvement with football (and all sports) by spectators. We shouldn’t merely be turning up every week to watch our team (that’s if you’re not so disillusioned that you still actually show up), we should be involved in the real, day-to-day running of our clubs.

At the moment our commitment to our team is manipulated by whether they’re doing well in the league or not, and we, as fans, have a very limited influence over the outcome of that. That would surely change if we had a more active role in how they were run, and what they could provide us. What we can have right away is a say on the immediate and long-term future of our clubs, and that should be our right today, straight away.

It seems unfair to deny Manchester City supporters their moment in the sun, but if they want to change the game they purport to love so much, they, like every other football fan, should start to take it back from the corporate thugs who ripped it away from us in the first place.