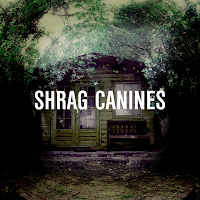 In a tired, post-recessionary UK, it's easy to understand why people stick their head under their duvets and weep themselves slowly to sleep. Times is hard, alright, but times are also fantastic. In love with these times in spite of these times, indeed.

Shrag embody the exact opposite of Cameron's drab, bitter Britain. The world isn't "broken" for Shrag - and if there's anything around to be smashed to bits, then they'll do it ta very much. 'Canines' is a manifesto for the hard times, but also a clarion call that we can still have good times. We don't have to do what we're told, and we don't have to be told what to do. Shrag make you feel you can do anything.

'Canines', the band's third and best album, is like a greatest hits collection. Remember rushing out and buying 'The Head on the Door' by The Cure and wondering which song they'd release as a single next (just me?); well this record is just like that.

Those who saw Shrag tear across the UK with Tunabunny a few months back will recognise many of these songs, and so 'Tears of a Landlord', 'Chasing Consumations', the wonderfully New Order-ish 'On the Spines of Old Cathedrals' (a song they'll look back at in years to come as a four minutes of perfection to be deeply proud of) and the barking threatpop of 'Tendons in the Night' will all give you that warm glow of familiarity.

Then there's the glam sex-stomp of 'Devastating Bones', in which Helen King sings: "You've got devastating bones, and I'd like to call them home", whilst the rest of the band add, saucily: "I think you might need those knees for kneeling." Open the window and loosen your collar when that comes on. And send the in-laws out to walk the dog.

Don't think for one moment that Shrag all are sex perverts - oh no. There are tender moments here too, such as the twitching, insecure lines of 'Flinching at Forever' and fairytale closer 'Jane With Dumbbells', which is genuinely moving.

Real, instant pop albums like this only come along once every three or four years. This time it's Shrag's turn. Still in love with these times.

'Canines' is released on Fortuna Pop! and WIAIWYA on 9th July
Posted by A layer of chips at 13:08

OK, can the rest ov us, you know, somehow listen to it too?