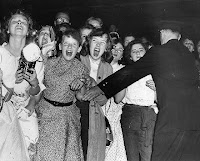 Just a very quick post as I swelter in an office writing corporate shit about stuff that no-one will ever read: we've made a start on gathering up some track from all the bands appearing at our Nottingham Pop All-dayer on Saturday 29th September, and we're sticking them up on our tumblr thing. Or rather Andy is, because I don't really understand tumblr.

Already up there are tracks by The Hobbes Fanclub and Shrag, and I believe The Fireworks will be next up. Keeping checking back to give yourself a very slack-arsed preview of who'll be playing what come the end of September.