In which Bradford is, for five minutes, the centre of pop music's renewed claim for world domination. 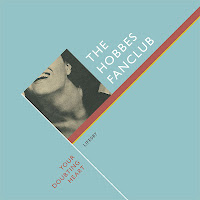 This second seven inch from The Hobbes Fanclub is the real deal, the perfect single; two short bursts of spine-tingling brilliance that make you want to either go and smash a bankers' windows in, or lie in the grass looking at the sky and dreaming of what you really want. These things can be done in either order - just make sure you're listening to these two songs whilst you're doing them.

There are no a-sides here - not to me, anyway. 'The One You Love' is introspective, maudlin, powerful and, to be honest, a little bit teary. It sounds like it'd fit nicely on those first four classic Ride eps, and there's no higher praise from me than that.

'Your Doubting Heart', a tale of self-doubt and insecurity, you emo filth, is decidedly more upbeat, and rattles along like in much the same way The Wedding Present used to when they were good and less awkward about writing pop songs.

Keener ears than mine might say there's a definite similarity between these two Hobbes Fanclub songs and the Pains of Being Pure at Heart, and they might be right - I couldn't possibly comment. Sure, The Hobbes Fanclub wear their influences on their sleeves, but they do it with pride and when they take their lead from bands that have sat if your record collection for years, then it's pretty much impossible not to fall in love with them.

Have yourself a listen to 'The One You Love' on the Nottingham All-dayer tumblr, and make sure you com and see them on 29th September in Nottingham, as well as everywhere else. They're playing in Paris soon. Now that's a combination to dream of...
Posted by A layer of chips at 14:46