Pop music in an age of austerity 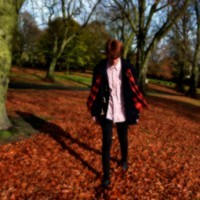 Getting ready for next week's Budget? All set to see what that evil, pursed-lipped fuckpig Osborne can throw at the already marginalised next? Feel like starting some fires? Then why not listen to Autumns?

Autumns is, as far as I can make out, one person called Christian Donaghey from Derry, and he makes a sort of claustrophobic pop music that sounds like a thousand frustrated screams condensed into two and a half minutes. It's heavy on the reverb, and sounds like it was played on a guitar bought from Woolworths in 1978, and recorded in the bath.

There are four tracks on the Autumns soundcloud. 'Tired Eye' rattles and rolls and sounds like Eddie Cochrane playing in a cave. 'I Will Not Go' has a bastardised 'Be My Baby' drum line, and amateur Duane Eddy guitar riff... it's generally pretty thrilling. 'Who Would Have Thought' starts like a Joy Division number and never really breaks out the laffs, but is deeply enjoyable all the same, with Donaghey mumbling away in the background like some bitter old crooner...  I suspect he's a mere strip of lad, mind. 'Keep on Sinking' sounds like the music that should be on all ghost train rides if these seaside types are serious about making them scary.

Take all of this and then listen to it whilst you're looking at a photo of George Osborne. I can't be held responsible for your actions.

Cave Ghosts, meanwhile, seem a happier, more fluffy prospect - but no less delicious. From Dublin, they sound "like cats singing sea shanties", and, forgive me, but I'm trying hard to see how that can be a bad thing. 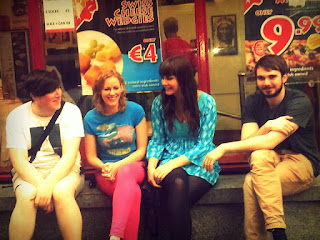 The band has some music available here, and it's all Very Nice Indeed. In many way Cave Ghosts remind me of Slow Down Tallahassee, with their "aahh, ahhhs", "oooh, ooohs" and general ability to, y'know, write deadly addictive pop songs. 'Hideaway' is such a thing, and purrs hither and thither with its jaunty keys and crystal clear vocal.  Meanwhile, 'La Concha' nearly gets funky before simmering down into something the dearly-departed Orca Team would be proud of. Last up is 'When You Go Away', a sun-drenched uk*lele number which begs to be played on a beach whilst a monkey waiter rubs suntan lotion into your back, and you're served pints of lager by your favourite football player. It's all very dreamy.

Two very different new musical delights, then, but both of them drag you out of this world of piss and shit, and into a much, much nicer place. If Autumns make you want to go out and kick a car, then Cave Ghosts are there to put a plaster on your toe afterwards. Bless them both.
Posted by A layer of chips at 17:44