Ghosts of dead aeroplanes - an interview with Tim Pattinson from Prolapse 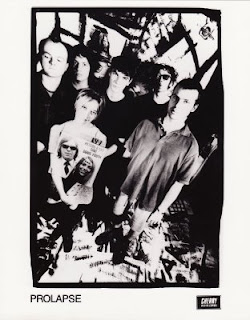 Between 1993 and 1999 I was totally, utterly and completely in love with a band from Leicester called Prolapse, so much so that I followed them around shortly after they released their masterful first album, Pointless Walks to Dismal Places. Almost literally.

It's by some stroke of huge fortune that Prolapse's drummer, the deceptively explosive Tim Pattinson, ended up in MJ Hibbett & the Validators, and so a part of my simple youth lives on today in another great band.

Tim was kind enough to talk about his time in Prolapse.

How did you end up in Prolapse?

Well we formed as an idea first before actually playing together. Me and Geordie Mick had been in a couple of bands together before Prolapse, and then one night it was decided with Pat and Scottish Mick to form the most depressing band in the world (not entirely seriously) and then eventually we got around to playing. The first thing we ever played that night ended up as They Slept In Darkness – which at the time we thought was a really enigmatic title until someone pointed out that most people do that!

Tell me about the early days in the band. Did you realise with those first two singles that you were in such a special band?

Special? The biggest excitement I had on any of the early recordings was probably on the first demo we did, it had a sound that we only really got close to capturing again on the last album – never got close otherwise. One of the things that was great about the early days was creating a buzz in Leicester, and eventually getting out of it. There were a few big local bands that always seemed to dominate things and we were the upstarts that actually got out of the city. I think as soon as record companies were interested you started to dream of what might happen.

How long did it take to paint the covers of those limited edition copies of 'Pointless Walks...'


Well we did a load of them at a gig at the Sausage Machine at the Russell Arms, they were put on the back of the stage and people got up and painted them through the gig, which was THE hottest gig I’ve EVER done. Then we did a few each ourselves and I think the rest were done by some art students or something. Whilst it was a great idea, I’d have loved to see the cover on a 12 inch sleeve. Probably never will have another one of those.

What were the relationships like in the band? Did Mick and Linda have big fights? If so, did that affect the rest of you?

Okay for most of the time. There was a period when Geordie Mick and Linda started seeing each other and Scottish didn’t know and it was a bit fractious but otherwise the tensions weren’t really between Mick & Linda. The only fisticuffs I can remember are between me & mick (both on separate occaisions) and a great one at the end of the first gig on the Italian Flag tour when Mick had introduced Cacophany #A as “the boring one”, which got Pat riled, then by the time I came off stage they were at each others throats. Thankfully hatchets were buried.

There seemed to be quite a lot of money (relatively) thrown at the band around the time of Italian Flag and the singles off that album. Did the record company think you were going for the charts? And did you?

I guess we were going for the charts yes. Though to be fair the record company were more convinced than we were. Putting out Autocade as a single caused a bit of a rift – Mick hated the song – hence he’s not on it. We went out for a meal with the record company to discuss the second single, there was the Deanshanger camp (Me, Scottish and Dave I think) and the Autocade camp (Geordie, Linda and Pat and the record company) after much food/beer/wine/discussions we ended up with the bizarre decision of Death Seaside being the 2nd single – quite how that happened I’ve no idea. We did some new mixes and it was awful and eventually we did the sensible thing and put the poppy one out as the single. I think the problem was the video – in those days you could have bought a house for the money we spent on that and it’s awful. Doorstop which is brilliant only cost £1,000. It’s all down to the ideas I guess.

What do you make of the last album? Was it a disappointing way to go out, or do you think it's a lost gem?

No I really like it. I think if we’d had the songs of the Italian flag with the sound and atmosphere of the last album, then that would have been excellent. I think Government of Spain is one of the best things we did and Fob.com was actually a single of the week in the NME (our only one) you know, so it’s not THAT bad!

What finally split the band?

Once we got dropped by Warners (Radar) it was a case of accepting that the band was never going to be a full time concern. Most of us had jobs and lives that had in a way been on hold for about 5 years. If we could have got away with doing an album every 2 years and a handful of gigs (like with the Validators now) then I’d have loved to carry on. But the problem was always going to be the pressures from record companies, agents, press, management (and probably some of the band) etc to do more and more. It was therefore just easier to pack it all in than to try to carry on at a reduced level. It meant getting a life back, being able to say things like,’ yes, I will go on holiday then’ and not need to get approval from 6+ others.

Who were Prolapse's musical heroes?

There’s a few that are easy and obvious, like The Fall, Joy Division, Neu, Sonic Youth & Stereolab, but that’s probably slanted towards my own personal list. Quite a bit of Post punk stuff, Pat was always inspired by the Chameleons, I know Linda came from a more indie pop angle, Shop Assistants etc. I think of bands around at the time, the one time I saw and thought “yes, I know what you’re going through” was Mercury Rev (Yerself is Steam era)– they seemed to have the same level of chaos going on.

You’re not really expecting only one are you? Very hard to narrow it down. I think on each album there was one song where I think we totally nailed it sound & performance wise, these being Doorstop, Framen Fr. Cesar, Flat Velocity Curve & Government of Spain. On top of that I’d add Slash/Oblique & Visa for Violet and Van.

And what is your favourite memory of your time in Prolapse?

There’s 3 that spring to mind.

First one playing the Reading Festival, we were 2nd headliner in one of the tents. And it was absolutely packed. When we walked out on stage it was amazing. We’d never seen that many people at one of our gigs (and never again!) it felt like being a proper pop star for a few short moments all those teenage dreams etc… just great.

The next one was in Paris, first and only time. We started with Serpico and when it kicked in the crowd surged onto the stage throwing my friend Emma (different Emma) onto the stage along with loads of young French kids. Totally mad, and it was followed by the funniest night of my life. We were doing Alan Partridge impressions to a packed pub of French people who, presumably thought we were irritating drunk Brits – as it was we thought we were Great! Never laughed so much!

Can you dispel one Prolapse myth?

I wouldn’t want to dispel anything rather reinforce one, the curse of prolapse! Autocade was pretty much blanked by radio1 because of Princess Diana’s death, apparently they thought it was a bit of a touchy subject. Then about a month later the day the Italian Flag came out, there was an earthquake in Italy which destroyed St Francis of Assissi’s church. Also we are entirely responsible for the demise of Flying Nun records. We’d agreed to do a one off single on them (it was going to be Visa for Violet and Van) and then they went bust a few days later! There was other stuff too but I cant remember what they were, a night in the pub with Pat or Mick would I’m sure bring more back.

Do you still see or keep in touch with any of the band?

I still see Pat when he’s over from Denmark which is usually a couple of times a year. Geordie Mick who lives in Leicester I haven’t seen for years nor Linda – they could always turn up to a Validators gig if they wanted! I actually saw Scottish Mick last month in Oslo, we went to a death metal pub, they served the cheapest beer in the city, strange that Mick would know about that.
Posted by A layer of chips at 15:49