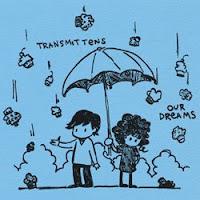 Who ever wants to actually open a Wee Pop! release? They're almost too beautiful, aren't they? They also remind of Ye Olde Paydays, but that's another story.

Transmittens play all sorts of tricks with your mind. They go all sickly sweet on Boo and Sparklemittens (which they rhyme with kittens - oh yeah!), but then there's the indiepop torch song of My Heart's in a Dumpster, which ticks every box in the fey boy meets fey girl situation. And on the other (third?) hand there's the punky Fingers Crossed, which sort of sounds like Helen Love playing a Lucksmiths song. Hmm, that might not be strictly accurate, but it sounds like that to me, alright?

Saturday Socks also rattles along at a fair old pace, and sounds a little bit Elefant 6, maybe. But, ultimately, you come back to indiepop, and on Our Dreams, Transmittens do it just about as good as anyone else at the moment.

Those who still mourn the perfect demise of The Deirdres should get an earful of Transmittens. Sure, they don't sound half as chaotic, but there's the boy-girl vocals which have the same innocent charm that first turned me on to those oiks from Derby. High praise OR WHAT?
Posted by A layer of chips at 17:01