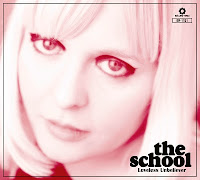 There used to be a school (ha!) of thought that a band shouldn't put singles on an album. But what if those singles were so good that you had to include them? Or what if you wanted an album to be a wonderful forty-minute snapshot of the last couple of years of a band you cherish? You'd want all those singles on there, wouldn't you?

And so I'm glad The School have managed to fit their singles onto 'Loveless Unbeliever', an album to lush, playful, perky and pink that it makes even the funless Monday morning a better place.

All the hits are here, from the aftermentioned greatest misses to tracks you've heard in sweaty, shitty, small rooms at venues around the country, like 'Valentine', which makes you think Sandie Shaw might fit in nicely as a backing singer for The School.

Then there's 'Hoping and Praying' - the sort of bubblegum pop that The School have made their own over the last few years, and 'Summer's Here' which makes you want to scrape off your socks and lay on the grass and look at the sky.

Liz looks coyly from the cover of the lushly packaged album. It's her band alright, and it's something of a minor miracle that this album has seen the light of day what with seemingly endless personnel changes over the band's lifetime. Indeed, last year's indiepop all-dayer in Nottingham, which The School headlined, was the first time that particular incarnation of the band had played on the same stage together.

Hits, then. Thousands of them, and from Cardiff with love. Well, 13 on 'Loveless Unbeliever' at least...

PS. I'm hoping everyone saw the deliberate mistake at the top of the post earlier today? You didn't? Right. Please move on...
Posted by A layer of chips at 10:21