Sourpatch: one more time with feeling 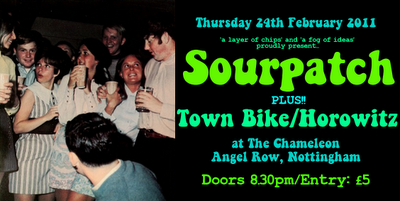 As you will see in a couple of weeks time when I get round to doing a half-arsed review of the last twelve months, Sourpatch have entered my life and made it altogether a happier place this year. Which is why I don't really mind getting excited about something which is happening NEXT YEAR.  Crazy, I know, but I still can't quite believe that Sourpatch are playing in Nottingham.

I get so nervous about putting overseas bands on. What if things are done differently abroad and all the bands get their own dressing room with grapes and shit? What if they want - gasp! - feeding? All these fears have been allayed over the years by bands like Electric Pop Group and Northern Portrait who have just got pissed with the rest of us. And why wouldn't they?

I digress. And I shouldn't 'cos Sourpatch ruled my world in early summer by putting out an album so heartfelt and so raw that in the time it's taken to write these three paragraphs, I've reached for it and put it on again. And, come the end of next February, they'll be playing in our favourite Nottingham venue, The Chameleon.

Also playing will be Horowitz, who's 'Popkids of the World Unite' album has, I'm led to believe, landed successfully at Thee SPC and will be landing on your doormats over the next couple of days.

Completing the bill will be Alka Seltzer, fizz punk poppers Town Bike, all the way from that Liverpool and probably still wearing matching outfits. Please note I can't be sure about that last fact, because there's a recession on and they might have had to resort to wearing their own clothes for a while.

Anyway - despite it falling on the same day as London Popfest, I really do think you should come along. Then speed through the night down to London to relax with the other 207 people in Europe who like indiepop. It's the done thing, darlings.
Posted by A layer of chips at 16:32

i think the only thing they will want is to know where the best vegan friendly place in nottingham is located. they don't have any of that rider bullshit to worry about. they are some of the nicest people who just want to have a fun time, and can make due with about anything you give them. so vegan friendly food, a floor to crash on, and a never ending good time.

That's handy, then - there's a vegan cafe about 20 yards from the venue!

You should come over too, Mike.