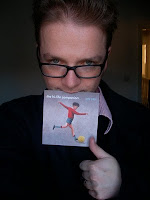 I'm way too impatient, this much I know. I'd listened to this album by The Hi-Life Companion about three times and I was about to leave in the pile doomed for the charity shop, and then, halfway through the title track on the fourth go 'round, something clicked, and I realised that this less-than-heralded release could well feature heavily at work for the next month or so.

It was the spikier songs that caught me first; songs like 'Times Table' or the smiling 'Night Comes Down', which could have easily found a home on Ride's 'Going Blank Again' album, which its dreamy harmonies and the way it pays out at the end of nearly every line.

For the whimsical librarians among you, there's songs like 'You're the Greatest', which sounds like one of mini classics that Belle and Sebastian used to knock out effortlessly before they turned into a cabaret act.

And that's followed up with with 'One Man Team' - a metallic new wave rush that reminds me a bit of early, exciting Elastica and features some excellent handclaps.

The dreamlike title track is where this album hits its peak, a foray into David Lynch land, with eerie, wispy vocals and gentle - yet menacing - picked guitars fighting it out with strings.

The album ends with the epic 'In Your Heart, a Cathedral', which builds and builds without ever threatening to be overblown or ruin what has come before it.

'Say Yes!' is available to downloand now from the usual places that complete confuse me, but if you want a physical copy (and you really should for the wonderful cover artwork alone), then you can order it from Plastilina Records of Peru soon.

Download 'Night Comes Down'.
Posted by A layer of chips at 10:40