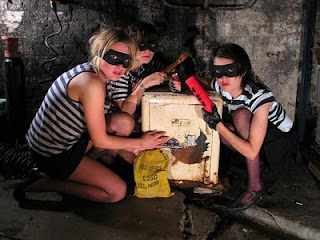 I make no apologies for another Shrag post, because they're ace. And fresh from gadding around the European countryside, Helen answered some questions for me.

How did the European tour go? What was the best/worst/funniest moment?

European tour was great! It was completely insane, we played in all sorts of strange and wonderful places - on a boat in Lyon which one of the best shows ever, a fish restaurant, a huge gothic farmhouse in the middle of the Italian countryside...it was exciting for us cos it was our first proper tour on our own, we got treated very well and met lots of lovely people. The distances we had to drive were crazy - the last four dates we ended up being in the van for around 11 hours a day, which could have been trying, but we were lucky as our tour manager/driver Al, from Boxcar recordings, turned out to be an absolute legend. He looked after us and never got annoyed by the schedule, or with my incessant losing of articles of clothing/glasses/items of considerable value (I left my Mac atop of a broken down tractor somewhere in an Italian field (i got it back)) and in fact my memory of the whole trip was that we spent the whole time laughing, albeit in slightly deranged fashion. Also, the deep connection between European motorways and sex was a source of fascination, what's all that about? Every time we stopped at a service station there'd be these funny little booths with travel sex toys proudly on display, or not even just sex toys/devices, but sundry sex-themed accessories - a pair of fluffy slippers designed like a pair of breasts, so you wore one breast on each foot, a neck pillow designed like a giant horseshoe-shaped cock...obviously this provided us with hours of aforementioned deranged hilarity, much of which is documented in the tour diary we made, which morphed into a horror movie when we got to that Italian farmhouse (watch this space). So yeah, we got the bug for sure. And, we got lots of invites back, so we hope to return, maybe when it's a bit warmer out there next time though..


How did the remix of 'Rabbit Kids' come about? Were you approached, or did you approach?

We were approached; but Tony Tronic is a friend, he did a remix of one of our earlier singles-'Talk to the Left'-that we really loved. That song was basically a protest against overuse of supposedly 'sexy' talk when getting it on with someone, and Tony Tronic remixed it so that it ended up with us being the ones talking dirty. So, we liked his sense of humour, and he always does something unexpected, so we said yes.

What's up next? The second album?

Yes we've finished recording the second album, it's being mixed at the moment. We're excited about it. The last album was written over the 5 singles and didn't really feel like an album so much as a document of what we'd done so far. It took a long time to record cos of various personal crap that was happening at the time, so when it came out it was more a sense of relief than anticipation; this time feels different. We recorded it relatively swiftly and with a sense of it as a whole album all the time...not that 'Life! Death! Prizes!' (that's the name of the new LP) is a concept album or anything, but we've consciously tried to get together a strong set of songs that we think work well together. I'm impatient for it to be ready. There will also be a second single released just in advance of the album...

You seem sort of set-aside from the normal indiepop scene. Is this intentional?

There's no intent, I'm just not sure we're strictly speaking an indiepop band. I guess we're generally a bit more at the shouty/noisy end of the indiepop spectrum, if such a thing exists (that sounds weird). We've never consciously identified ourselves with any particular type of music - when people ask us what our band sounds like there's usually a collective "Um......" and then some mumbling about 'pop' and 'punk' and 'shouting' which is probably unhelpful. That said, I'm genuinely excited about what you call the indiepop 'scene'; there's lots of bands/promoters/Djs etc that I love doing some really interesting stuff AND, in our experience at least, everyone is consistently incredibly supportive of each other. It's been a treat to see Indietracks become what is is, for example. We've been very lucky in the shows we've been asked to play and the chances we've been given and I am entirely uncynical about it.

What do you make of people comparing you to Huggy Bear now and again? I loved Huggy Bear and I love Shrag, but I can't see many similarities, can you?

Yeah I love Huggy Bear too, immensely, but I agree that I don't always understand the direct comparison. To a certain extent I think if people see girls shouting, or boy/girl vocal exchanges, the reference point will, somewhat lazily perhaps, spring to mind, but I think we are usually musically, structurally, very diffferent. I mean the comparison doesn't annoy me - I'm flattered cos I love the band, and maybe there are occasionally certain points of confluence/influence, but in general I think if you asked someone what Shrag are like and they said 'huggy bear', you would be mostly misinformed . I always think that if there is a riot grrrl influence on what we do, it is one which has been mediated through tonnes of other stuff before it gets filtered through us; which is to be expected as all five of us have really quite different musical tastes.

Who or what is the most important influence on Shrag?

Without wanting to sound saccharine I think the thing that has shaped us above all else is a sense of friendship, we started off just as mates in Brighton, all big music fans who would go out dancing or playing records or whatever and really got along. Probably spent too much time in each other's company..and then it was a case of starting to realise what we could enable each other to do if we started doing stuff together, it was a series of totally welcome surprises. Also, looking around and seeing other people making music and gradually seeing the way things could be possible - a sense of collective excitement and/or stupidity.

Do you want to be big pop stars? if it happened, what would it mean to you, do you think?

If being a big pop star meant the fun would increase and we would get loads of action and we could afford to not work and make music when we wanted, then bring it on! But we're not and never have been careerist about it, if anything we began with the opposite of a masterplan (a servantplan?).... I don't think there's much danger of us becoming popstars in any case, but the other thing is - and I know this is kind of a cliche but it's something I've witnessed on more than one occasion - bands who've 'broken through' or whatever occasionally start to look like they're not enjoying it any more, which seems kind of sad...

Having said that, I think we've definitely got more ambitious as we've become more confident in what we might be capable of, and of course we want as many people as possible to hear what we've done, but mostly that ambition is directed towards enabling ouselves to continue making that music without bankrupting ourselves and John Jervis (wiaiwya), and having as much fun as possible whilst doing so. Recording and touring and all that is so expensive! if we could remedy that it would of course be brilliant, cos we love it more than anything.

What's your favourite Shrag song and why?

This changes all the time. Usually it's heavily influenced by how recently we've written it, I always get infatuated with the last thing we've done for a while. So, at the moment, I like Rabbit Kids, it's our newest fully-finished song, but it's also one of the poppiest things we've done and that will always please me. I always feel that the poppier something is, the more important it is that the lyrics are pitched just right, and I'm content that I've done that with that song. It's something I've wanted to write about for a while - my lifelong hatred of goodbyes, and the attempt to rob them of their horrible potency and finality by crystallizing memories through various cultural reference points - books, records, places, whatever - and when we did the music I thought this is probably the one. So yeah, I like a good pop record and we tried to make one with Rabbit Kids. Other than that, I think I can say we all have a soft spot in our hearts for 'Hopelessy Wasted' off the first album, i think we surprised ourselves with that one at the time and we're still dead proud of it.

Which way will you vote at the general election, if at all?

I'll vote, though it will more or less be a protest vote as we are of course hurtling inexorably towards a Tory government headed by an unbearably smug moron. I wish I could say something different, but like everyone else I feel dramatically uninspired/ let down by Labour, so it will probably be the SLP.

Who's your other favourite band at the moment?

I'm a massive Love Is All fan and they are about to release their third album which I am impossibly excited about, so I'll say them. The first two albums - especially Nine Times That Same Song - seem to me to be everything pop records should be, they are intensely melodic, exciting, HUGELY funny, and both joyful and melancholic - it never gets stale, they rule.
Posted by A layer of chips at 15:21