Bart and Friends make me happy 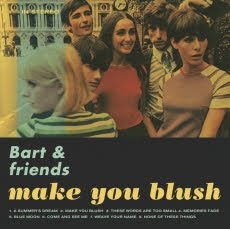 Which is why I'm sat inside listening to the new Bart & Friends album, "Make You Blush", and wondering how the whole world didn't explode when Pam Berry and two of The Lucksmiths got in a studio together to make an album.
Mark, Louis, Pam and Bart from The Cat's Miaow are most of Bart & Friends, and the sleeve notes to this album would have you believe that it's been produced by James Dean. All those people come together to perform songs as adorable as 'These Words Are Too Small' or 'Memories Fade' - both of which remind me of bands as diverse (well, you know what I mean) as Brighter and Belle and Sebastian in their long-gone prime.
But it's hard not to come back to Pam Berry's voice. That downbeat, lush, wonderfully familar voice that almost like no other in pop is like an extra instrument, and Bart and his mates provide the perfect backdrop.
My only gripe is that it's only eight songs long, and my the time of the almost tear-inducing 'Weave Your Name', it's nearly time to say goodbye - and then press play again, obviously. They leave us with 'None of These Things', which is about the only time the guitars sound threatening.
The eight songs come in at under 15 minutes, but it's a 15 minutes that'll live with for a long time. 'Make You Blush' has been the soundtrack to a weekend on the Lincolnshire Wolds for me this past two days. It's made a great weekend just about perfect. It'll do the same for you, wherever you are or wherever you're going.

I've listened to them.
beautiful music.
I want to have their mp3s,
mm
can you help me?

Bart & Friends "Weave your Name" is probably the best song of this year!