Getting a life with This Many Boyfriends 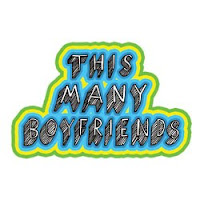 Talking of whom, here's the first proper release from This Many Boyfriends on the increasingly wonderful Thee SPC.

You might have TMB down as some bunch of shouty racketeers who can't play their instruments for toffee but who are, you know, great when you're drunk. You're completely wrong. 'I Don't Like You (Cos You Don't Like The Pastels)' and 'I Should be a Communist' show a band that have found their pop core pretty quickly and aren't willing to shift. The latter even nicks the bass line from 'Barbarism Begins at Home' right near the end, the cheeky scamps.
'#1' takes a Jeffrey Lewis turn, before 'Trying is Good' cranks things up a bit and takes the last train to Fuzzville and manages to take the piss out of those bands who want to remain in their micro-indie scenes. You might want to call it the new 'Punka' - I couldn't possibly comment.
Hey, what's this? It's the 'Be My Baby' drum beat on downers, and it's an ANTHEM called 'Three Year Itch', which, if it were released by Vivian Girls, or someone like that, would be drooled over from a great height. Lauren even does this spooky spoken-word thing half way through. Think 'Remember (Walking in the Sand)' but for the drainpipes generation.
Onwards!
'Diaries' reminds me of Mascot Fight or Plans and Apologies or any other ace Derby band you might want to mention, whilst the weepy 'It's Lethal' ends this life-affirming record on a stubbornly downbeat note. But so what? Here's an EP that sounds like it was recorded by people having fun, and that's a pretty fantastic thing to hear.
'Getting A Life With' is available now to pre-order on CD with immediate digital download from the This Many Boyfriends website, whilst 'I Don't Like You ('Cos You Don't Like The Pastels)' is available now as a free-download from the Thee SPC website.
Posted by A layer of chips at 16:32