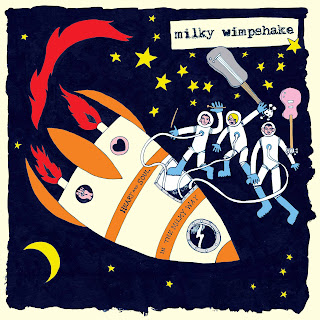 Hear this: in times like these, when a Tory government is opposed by a Tory opposition and their sordid games are played out in front of a Tory media, then you need the new Milky Wimpshake album more than ever.

'Heart and Soul in the Milky Way' is 15 fizzbang pop songs about the modern state of the human condition. In the grand Milky Wimpshake tradition it feature two cover versions which are superior to their originals, in Jake Thackery's 'La-Di-Dah' and Les Cox Sportifs' 'Omnia Mea Mecum'.

'Heart and Soul in the Milky Way' simply reaffirms Milky Wimpshake as leaders of the pop underground - 20 years after they first surfaced. Pete Dale remains that underground's finest frontman and songwriter, and, instead of reviewing this vital album (suffice to say you need to buy it immediately from Fortuna Pop!), I thought I'd ask him a few questions about life, love, and politics...

How much has this government fueled what you write about?

Not much, frankly; I hate them, of course, but when I was writing the songs on the new LP, such things weren't really on my mind. This wasn't a decision, by the way: I didn't just decide to not write any 'political' songs, but everytime I got the buzz for a new song, it turned out to be nothing to do with, y'know, the government. Maybe the next LP will be called 'I Hate Michael Gove', more than possible, but this one is what it is! I sat down with my guitar and this is what came out me 'ead!


What's 'Uncool Jerk' about? Do you feel as much like that now as you did 20 years ago, if indeed you did at all?
Today, I don't feel much like I did in 1993, that much is for sure! And I was aware that I was harking back to that kind of twenty-something angst with this one, but with tongue firmly in cheek (although, to be honest, I think my tongue was always either in or near my cheek in all eras of Milky Wimpshake, which I guess is what you're driving at with the rejoinder 'if you did at all'?).

'Uncool Jerk' is just a throwaway song, really, just a bit of fun: there is a new-ish band in Newcastle called Women in Revolt, kind of a polysexual mix up of blokes in dresses but who still look like blokes (eg. beards remaining in place), women who look too harsh-faced to be women, Wayne County cover versions, that kind of thing; I really like them, but I noticed that they have a 'go-go' dancer who totally has 'the moves' and, the day  after I saw them live for the first time, I wrote this song in 5 minutes as a kind of grievance thing (ie. why don't I got the moves?). Having said that, it's not really 'about' Women in Revolt and their dancer, just a daft punk song about realising that I'm uncool and that I'm not a good dancer but, also, reminding y'all that I ride a bicycle and I don't wanna BMW (in case you forgot!).


Did you really expect Wimpshake to still be going after 20 years?

No, otherwise I would have picked a name that I wouldn't feel semi-embarrassed to say in front of my children, my dad, colleagues at work, etc. I'm not really embarrassed; but it does sound a bit like a reference to, y'know, white body fluids or something. I did once see us listed as Wimpsnake, which sounds a bit more rockin' perhaps, like Whitesnake for wimps! Joking aside, though, I started the band on a whim and then put out the first LP because Slampt needed some product to keep the coffers turning over circa 1996 and then, well, people kept offering us the odd gig and here we are today, international rock stars! Well, not really obviously, but I think we've released 5 or 6 singles and 5 albums, each selling between 500 and 2000 (maybe more in some instances, eg. 'Lovers Not Fighters' which I think had 1000 CDs on Troubleman, 1000 CDs on Fortuna Pop I think 500 on vinyl through Youth Clbu Tape Club!), so I guess we do have a bit of a following, which I greatly appreciate and, in short, me and Christine still enjoy doing it and always seem to manage to find a drummer in the end..!
Do you think in Fortuna Pop! you've found the perfect label to put your music out on?
Maybe, yeah! Minimal pressure re: musical content, decent treatment re: free merch for the band, good support in terms of finding gigs, and they seem to make a good effort at getting people to review it. And I really like several of the bands on the label, notably Would-be-Goods, Tender Trap, Allo Darlin', Comet Gain and - my absolute favourites - Sodastream. (I could extend this list, before anyone reading this takes the hump, but basically you can just go to the F-pop website if you want a list of who's on the label... There's no band on the label which I dislike, in other words I like them all and they all seem to be lovely people, as I find is the case 99% of the time in the UK indie pop underground, don't you agree?)

Do you still listen to new bands? Who're your favourites?
Lovely Eggs, well, they've been going donkeys years but I love them. Um, can I say Viv Albertine? I'm so way into her new LP! That Scottish band, what are they called... Golden Grrrls! Their song that goes 'I don't love you anyway' (no song title on the single, punkily enough!) is an absolute killer! Spook School are great. In Newcastle, Les Cox Sportif are fab, and I really like Rexine and Silver Fox too. In Oxford, Pete Momtchiloff's group Hot Hooves are great, especially their song 'Christ on a Bike'! I'm sure there are lots of others but I can't think right now. Oh, Martha from Durham! So fab!! And, outside of the pop scene, I'm really into Uzeda from Italy at the moment. Obviously I could mention mainstream things I've been into lately, eg. nostalgia for Squeeze which I've been indulging in, but in terms of new bands those are the ones who spring to mind.

Do you hold any illusions at all that a Labour government would be any better than the shower we're lumbered with at the moment?
Yes, I am conning myself with that illusion! Loaded question my friend!! But I think it's obvious that they would be less bad; some praise! The world needs a massive revolution; I don't expect this to happen in England, well, not tomorrow anyway, but who knows? We need a revolution, though. In the meantime, a Labour government would be less bad than a Tory/SDP (or whatever they call themselves...) government.

Do you still connect more with anarchism than the more organised left groups?
Hmmn. I believe in being more organised, and I don't subscribe at all to that version of ultra-anarchism which is essentially ultra-liberalism ie. a faith in spontaneous and complete liberty for individuals without responsibility. But the kinds of anarchistic groups which I used to contribute to WERE very organised, and did operate very co-operatively; there was spontaneity, sure, but I've never agreed with the Leninist-Marxist line against spontaneity.

I'm reading alot of Badiou and Zizek at the moment, and read a LOT of Marx and Engels during my PhD, so I'm thinking about these kind of things a lot. I think my allegiences have shifted a little bit more towards Marxism and thus slightly away from anarchism, to be honest, but worryingly I've also become much less active in the last 5 years or so. This has only got worse since I moved to Oxford, sadly. But I do hope to get directly active again, and soon; and the first question for me, if I'm going to participate with others in an action, is always: am I prepared to risk spending several hours in a prison cell with these people?

Generally, in my experience of dealing with people on 'the left', whether they're black, red or green in orientation terms, generaly I feel that I would be prepared for that eventuality.


Wimpshake are spread all over the country now. How easy it to get together for practices and stuff? Does life get in the way?
It's not easy, but I think we'll keep it going for a good bit yet. Hope so!
What's the band up to for the rest of the year?
London next week, Nottingham on 2nd February, London again on 1st March, hopefully Reading and Oxford in April, and then maybe (hopefully) some more gigs here or there in May or June.
Posted by A layer of chips at 06:28