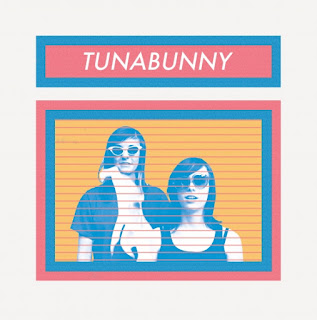 To call your groundbreaking third album 'Genius Fatigue' takes a wit beyond most bands nowadays, but then that should hardly be a surprise, because with this record Tunabunny have taken what they've built over their last two records, mixed it all together and spat our ten tracks of pure beauty.

After that hyperbole, relax. 'Genius Fatigue' writhes all over the place, from the Joan Jett/glam-stomp of 'Pachyderm, Fallen' to the pure pop of 'Serpents & Light' and 'Form a Line', and - of course - the pure spookiness of 'Wrong Kind of Attention'. It's almost like they were trying things out on their first two albums, and that kind of creativity has paid off with this, the first great album of 2013.

Musically, then, it's all over the place and just about impossible to classify. But listened to with open ears (metaphorically, you scoundrels), it's essentially a pop album. Those who saw the band last year on their semi-legendary tour with the dear, departed Shrag were genuinely surprised at how pop this band sounded live. On 'Genius Fatigue' they prove they can translate this to vinyl.

Not that Tunabunny are hairslide casualities just yet. They have a power and bile about them this time around that might've been there before, but this time it's more focused. 'Duchess for Nothing' sounds like Hole if they'd been as good as they thought they were; whilst 'Government of Throats' just rams it up the poor, sad excuse for an American Dream as well as any band is doing at the moment.

As well as the full-frontal stuff there's the aforementioned 'Serpents & Light' - a lilting lullaby, carried on by a killer bassline that sounds like it's about to fall over at any moment... but just keeps on keepin' on. There's also the creeping menace of 'You Do What You Want', a kind of tribal pop that no-one seems dare to make at the moment.

Perhaps once every ten years or so a pop band from the American underground comes through and captures what it means to be living in a certain time and a certain place. They also capture what it's like to be young(ish) and in a band and alive. Think Pixies, All Girl Summer Fun Band, Dressy Bessy... and others I've undoubtedly forgotten to mention. Tunabunny are as important to me as all these bands, with this album they're destined to delve their way into even more hearts.