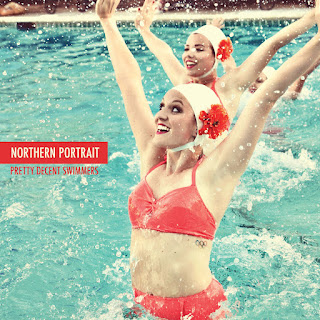 It seems like an age since Northern Portrait swaggered on by and stole our hearts, but none of that matters any more, because they're back with a single that isn't so much confident as downright cocky. You better watch out, because 'Pretty Decent Swimmers' is as likely to snog your heart right the back of the bikesheds as much as steal it.

Opener, 'Happy Nice Day' jingles and a-jangles in trademark Northern Portrait way before reaching an almost falsetto crescendo. It's as strong a song as the band have written, and blasts its way into your brain. 'Greetings From Paris' is, by comparison, almost bashful, with its "la-las", but Stefan gives a virtuoso vocal performance.

My favourite is 'Bon Voyage', a kind of Velvet Underground-meets-Orange Juice romp through a holiday romance ripped asunder by a lack of bravado, which reminds me of 'Queen is Dead'-era Smiths. It's also got a piano solo which you'll fall for instantly.

This remarkably self-assured ep ends the same as it began, with the power pop of 'I Feel Even Better', a sort of antidote to 'Bon Voyage'. Stefan is back on form, his pecker is up, and he's not afraid to tell his detractors how it is. This one's a proper earworm too, with its Marr-esque guitar refrain and flourishes.

There's dirty talk of Northern Portrait coming over to the UK to play some shows this summer. On this evidence we should all start getting excited right about now.

You can buy 'Pretty Decent Swimmers' here.
Posted by A layer of chips at 16:45