The first great single of 2013 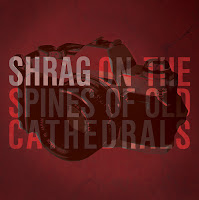 Confusion continues to reign about just how Shrag are going to better last year's 'Canines' album, but when you can rip another classic single off that record, we'll worry about the future when it happens, shall we?

'On the Spines of Old Cathedrals' is my favourite track from 'Canines'. It's apparently not about Lincoln Cathedral, but one of those fancy Dan foreign cathedrals we hear so much about in the press. Shrag, it seems, were quite taken with the building, and Helen went a wrote some lyrics about it.

This song has just about everything; and just shows how versatile Shrag can be. And, yeah, of course it sounds like New Order a bit but that's no bad thing.

If they want to write a song about Lincoln Cathedral, then I can't help them, but I could tell them about climbing to the top of Lincoln Castle (an altogether different beast, not to mention building), on a school trip and having a massive panic attack because of my ridiculous vertigo. I'm available for counseling sessions should they want to draw on my experiences.

Anyway, it's 2nd January, and this is probably the single of the year already. Unless you know something I don't...