The Flatmates: "I wanted to gatecrash the party, change the records and piss in their punch bowl" 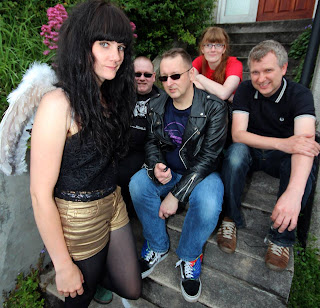 'Shimmer' by The Flatmates may well be the first indiepop record I ever bought back when I really didn't know what indiepop was, and was busy buying every Smiths, Cure and Housemartins release I could lay my hands on.

Since then, of course, The Flatmates have attained somewhat mythical status as generals of the Subway Organization - a record label so precious that someone should come along and re-release all of its records so that, for a tiny while, the world might be saved again.

Remarkably, The Flatmates have been plotting and planning to get back together again for the best part of six years... and we sat here without a clue. This summer they play their first gigs in over 20 years, and our Nottingham Pop All-dayer. If you told me back then that this would happen I'd never have believed you and would sat in my room sulking for even longer than usual.

Martin and Rocker from the band were good enough to answer this fanboy's questions.

The big question I suppose is: why the reformation? And how long have you been thinking about it?

Rocker: Been planning it for six years; Martin, Sarah and I were of the opinion that the band should have made an album in 1988-9, when instead they fell apart. Martin had some new songs, which he sent me demos of in 2006. I have a studio, so could add drums and keyboards, and the results were good enough to make us think we should get the band back together again - initially with a view to recording the new songs.

Martin: It's not as if we really "broke up" in the classic sense. Rocker and Sarah have always been amongst my closest friends, and when friends share musical tastes you often end up making music together. I never stopped writing songs so I wanted to perform and record them. Initially that was going to be with Rocker and Sarah, and Debbie if she was up for it. When Debbie quit in 1989 we carried on with a different singer as Sweet Young Things. The gigs went well, but people asked why we played so many Flatmates "covers". I guess if me and Rocker play gigs at all we either call ourselves The Flatmates or have to drop ALL Flatmates songs! 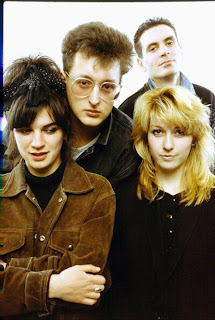 Did Debbie not want to do it? Does she mind that you are?

Rocker: I spent around a year in 2007-8 trying to convince Deb to come and sing for us, even if just as a studio project, but she didn't want to. As far as I know she doesn't mind - the project was put on hold for 5 years because neither Martin nor I would consider using the Flatmates name unless we had a singer as good as Deb. Then we found Lisa...

Martin: It would have been good to have Deb singing, but we eventually had to admit she wasn't into it. I must have asked at least 6 or 7 singers before we found Lisa. At one stage I was sending demos of our songs to Kim Warnick who was in the Fastbacks. That would have been cool. Not many UK indie bands could qualify to be in a Guns'n'Roses rock family tree [through The Fastbacks first drummer Duff McKagan.  A little inconvenient to have a singer living in Seattle though. Now we have Lisa and she's great. We couldn't have found anyone better to have as The Flatmates singer.

How did you go about picking Verity, Brian and Lisa?

Rocker: I saw Lisa play a couple of gigs in 2011 - and some time in early 2012 realised she would make an excellent front person for the Flatmates, so we asked her. I've known Brian for a few years, his band Peru are also playing the Nottingham all-dayer. When I happened to mention to Brian that we were re-forming, he volunteered to play drums. Then we decided to play live. At this point Sarah decided that she didn't want to be in the band, and so Verity, who I know through the Bristol indie scene, stepped in, and is learning to play the bass.

There's been a lot written about C86 (and its aftermath) recently. From the inside, did you think that you were part of something that would have such a legacy?

Rocker: For me, 1986 was our 1976 - Martin and I were too young to have played much of a part in the original punk explosion, apart from going to gigs, buying the records, and of course listening to John Peel. Like so many other people of our age our lives were changed by those gigs and records. When we decided to form the band, the DIY punk ethic informed all that we did - Martin started the record label, I DJ'd, we put indie gigs on weekly throughout 1986. With the number of great bands that were around then, many of which never broke out of the indie scene, it is no surprise at all to me that people are now re-discovering them - but at the time we just did what we wanted to, without any thought of a legacy or whatever.

Martin: It was an incredibly creative time. Everyone was writing fanzines, promoting gigs, starting labels. We even themed our gig posters as if they were a series of art works. Art was a very big influence in the C86 scene. There was a big Warhol thing going on with Subway, and elements of Situationism. For me, '67 was as influential as '77. As for legacy...
never gave it a moment's thought.

And was C86 as ideologically sound as the legend has it?

Rocker: As with all scenes there was a whole range of attitudes - from the Sarah Records crew who always tried to run their label to match their socialist polemic, to the self-interested and arrogant people in certain bands whose only interest was their career, in a very Thatcherite way. Most people who came to our gigs and bought our records just liked the music, and an often beery night out, I guess.

Martin: I don't remember there being any more "ideology" than at any other particular time. It was more about sweeping away the fag end of goth, the major label gloss and the general dullards that seemed to be everywhere. I was just a kid with a fanzine who saw bands I liked being overlooked by big record companies. I had no money or experience and ran the label from my bedroom at my parents house in Bristol, but I still wanted to give those labels a bloody nose by getting my bands on the radio and in the charts. That's why I did things like 12" singles that Sarah Records found so abhorrent. They wanted to be outside of "the business" - I wanted to gatecrash the party, change the records and piss in their punch bowl.  Mind you, Matt would have his rant at Subway in Are You Scared To Get Happy then we'd bump into each other at the same gig and he'd apologise and we'd just talk about bands and fanzines. We'd just go "hello trees, hello flowers..." and go all Fotherington Thomas whenever Sarah Records was mentioned in the Subway HQ. They were doing something different from Subway, but we co-existed quite happily. I don't know if it was ideological so much as good natured rivalry.

Rocker, you missed out on 'Shimmer'. Were you all still friends at the time, and was there a little hint of jealousy when it became a "hit"?

Rocker: Ha - I don't remember being jealous. 'Shimmer' was already in our live set before I left the band (I think!) and it was an obvious pick for release as a single. In my book it did no better than 'I Could Be In Heaven' (which I did play on), since both records got to number 42 in the only chart that matters - John Peel's Festive 50.

Martin: Rocker came up with the name  'Shimmer' though he didn't realise at the time. I had the guitar riff for the verse but didn't know what to do with it. It was a baking hot July day and as we drove over the Avonmouth Bridge the far end was covered in a heat haze. Rocker said "wow, look at that shimmer" and then I knew what that riff was for. 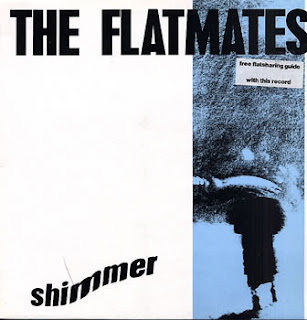 What's your favourite memory of the first Flatmates incarnation?

Rocker: Eating cold rice pudding out of a tin at 5am before sleeping on the floor of a Dutch promoter's office. This may well be certain other band members' least favourite memory.

Martin: Loads of great gigs mainly, but Chrissie Hynde at Dingwalls telling Deb how much she liked the band has got to be up there - even if just for seeing Debbie struck speechless!

And what excites you most this time around?

Martin: The enthusiasm and creativity is fantastic. We already have that gang mentality. It's the reason for bands existing, and its the way all bands should be. Four of us run record labels, three of us are writing Flatmates songs and actually any member of the band could do. Most bands are lucky if they have more than one person doing that. We're like the A-Team!

What can we expect from the band now? Will you finally get around to an album?

Rocker: Yes. Recording an album of new material feels like a natural step forward from playing these new songs live. Hopefully for 2014 release. By the way, the compilation album 'Potpourri' is getting a deluxe reissue in a double vinyl edition, out mid-July on Optic Nerve Records.

Martin: We've had enough songs for an album for the last two years. Now Lisa is writing Flatmates songs and the competition is spurring us all on. We could have enough new songs for three albums by 2014, and they'd all be great!
Posted by A layer of chips at 06:41

Nice one Sam. Hurrah for the Flatmates.