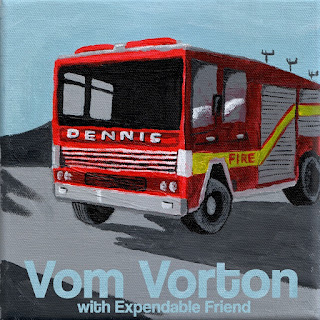 Tom Morton (for it is he) is nothing if not prolific. As well as reforming the mighty Lardpony, the lovely fella is about to release another album under his Vom Vorton pseudonym. Vom, if you didn't know by now, is mildly obsessed with robots and cats... and, it seems, massive heartbreak.

'Dennis' is a cracking little taster for the new album, and features the scrumptious vocals of Jacqui, aka Expendable Friend, who I probably need to hear more of. A happy/sad tale of love lost and that probably being for the best.... according to the new fancy piece. There's a cracking line about seeing the one that got away's name on a fire engine, and well, you can guess the rest.

Perhaps the best of the three tracks here is the fizzy, gliding 'The Note', which reminds me a little of the early 90s Morrissey stuff, but with a few more cute keyboards, and that's no bad thing. The song tells the tale of a doomed meeting at a party, and that thing that some people so where they write the wrong phone number down on a piece of paper, make their excuses and leave. How rude. The song's great.

Another tale of dire romantic luck is 'House of Fire' the dreamlike, almost VUesque drawl which is fair depressing if you read the lyrics, but is a pretty impressive take on the death disc genre, even if that is perhaps unintentionally.

It's all enough to whet your appetite for the new Vom Vorton album, 'Special Equations"', which is coming out on 1st July on House vs Home Records.

Take a listen to these three now, why don't you?
Posted by A layer of chips at 18:50