Tales from the fringe 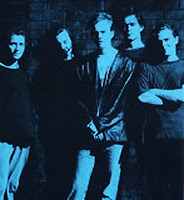 Of all the shoegaze bands I loved, Blind Mr Jones were perhaps the most ignored. Which sort of suited me quite nicely, because by the time they managed to release their second, superior album, 'Tatooine', in 1994 anyone admitting they still listened to shoegaze records was put in the village stocks and had rotten fruit thrown at them.

'Tattoine' was sent to me when I edited Atomic Magazine, and it made a healthy change from the early 90s dross that was coming out of both the UK and the US, as well as getting on the nerves of the friend who I ran the magazine with, who was getting into gabba at an alarmingly fast rate.

The album mixed the racing pop of Adorable with some of Ride's poppier moments, which was right up my junction at the time, and it even made me forget or ignore the fact that half the songs on the album featured a pissing flute.

Tracks like the appalling named 'Spooky Vibes' provided me with a pop rush that saw off the fact that I was somehow living off a daily diet of macaroni cheese and a weekly dole income of £35. And when I was feeling a bit down on my luck, then you could rely on the a doleful hymn like 'Hey' (they weren't much good at song titles, Blind Mr Jones).

Cherry Red have two compilations available, but I'd give those a miss and just buy 'Tatooine', if I were you. Fifteen years on it still sounds bittersweet, innocent and homely.