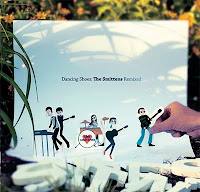 Oddbox Records, the label run by Trev McCabe in London, is making a push for the Second Wave of Indie/Dance Crossover (SWOIDC) by releasing a Smittens remix album. If you have terrible, terrible memories of dancing to Northside and Mock Turtles at a really shit house party just outside Lincoln in 1991, then a quick listen to 'Dancing Shoes: The Smittens Remixed' will banish them.

That happened to a mate of mine, obviously. Not me. No way.
Anyway, the album is streaming here, and you can buy it for three measley quid. What's stopping you?
Posted by A layer of chips at 16:35