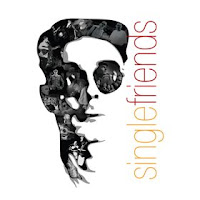 Back in about 1992, or something, I spent a good few months completely obsessed with the notion of Englishness. I remember moving to Nottingham and spending my dole days wandering around the older parts of the city pretending to appreciate the architecture and thinking that England was perhaps the most romantic place in the whole world. I think seeing Suede at Trent Poly did funny things to me.

I was, of course, being a massive fucking prick. But if I'd heard Friends back then, then I probably would've hunted them down, camped outside their front doors, and moved in with them. Friends, to me, are the most English band I've ever heard. And I mean that in a completely non-wanky non-1992 way.

Single Friends is a best of, basically. It comes only a few short years after the Best of Friends compilation, but I don't care, because the songs here are, without exception, pretty amazing.

The first four songs on this album deserve a biscuit. You'll Never See That Summertime Again remains one of my favourite songs ever, and whilst it's the most maudlin pop song you'll hear for a long time, it's kicked up the arse by the triumphant This is the Start. And then come two great big soppy love songs in Into the Sun and Beautiful to Me, which is an acoustic version. It's quite remarkable to think that all four of these songs were on one ep released back in 2006.

It's William's icy clear English singing voice that wouldve had the 19-year-old me in raptures. On songs like As Years Go By it sort of glides perfectly over the music, but he can also rough it up a bit, like on the James-y The First Day of Spring - complete with feral yelp at the end!

But it's the drop dead melancholy that makes Friends special. The stiff upper lip of I'll Never See You drips with fake optimism after the end of a relationship, as William chirrups "We don't belong here any more". Before admitting that he might not survive another winter, before remembering that he doesn't need the other person at all. That's the spirit.

But then it's all undone with Wanting, which is heartbreak and longing set to an acoustic and synth background. Stunning, really.

Quite why Friends aren't celebrated more is beyond me. For sensitive souls everywhere there really isn't a more perfect band, and Single Friends is a glorious carnival of hope, loss, love and daydreams. Listen to Far and Away - an anthem for running away from your problems - and tell me different. You won't be able to.
Posted by A layer of chips at 14:53

This sounds right up String Bean alley. However, there don't seem to be any of their songs to listen to on last.fm as there's a J-Pop group with the same name hogging up the charts. I'd like to hear a song before I decide to order this compilation (if it's as easy to do as you say it is). Anywhere online I can do that?

Liked this line from their wiki bio on last.fm, 'Friends completely disown any television programmes of the same name.' :D

You were right. I dig 'em! The upbeat chiming guitars of the Housemartins, the Field Mice, the Sea Urchins...similar vocal style to the Go-Betweens but, like you say, they are resolutely English. It's a melancholic sound I love.

'Far and Away' - absolutely magnificent. The guitars! Heart-stealers.

I am glad to see they are still going too! And they are based in London. Why is nobody booking them??

They're looking for gigs and do play now and again, yeah. They have a new acoustic album out soon. Look out for that.