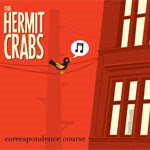 There's a general consensus that this new ep isn't as good as The Hermit Crabs' debut record, Feelgood Factor. But I can't say I really agree.
As ever, the band's songs are immaculately produced, and the exquisite opener About You Before is crystal clear. It also reminds me a little bit of Lush's later stuff, which is nice.
The title track is a complete joy, and explodes at the end in a way that reminds me of The Windmills at their most powerful.
Turn the Clock Back - I'm sure the band won't mind me saying - is very Camera Obscura, and is therefore extremely pretty indeed. It's also (as the title reveals) a bit of a weepy old thing.
Things are pepped up again with the Housemartins-esque I Don't Know How, which, it seems to me, would be a good track to do the washing up to.
It's good that The Hermit Crabs are around. In the absence of Monkey Swallows the Universe they've filled a gap in my record collection that was in danger of becoming very dusty indeed. Correspondence Course is a tiny triumph.
Posted by A layer of chips at 07:59