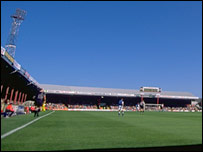 I woke up this morning convinced that Morecambe had beaten us 3-0. At home. And so I laid there in bed in a foul mood for five minutes before coming round and realising that it was actually half past five on a Saturday morning.
Today's game against Morecambe isn't the biggest game of the season, but it's aroused interest because Town's chairman has put his hand in his pocket and we've signed Adam Proudlock on a two and half year deal. Which is encouraging. We've also signed Stuart Elliot who had an amazing season with Hull a few years back, some bloke called Dean Sinclair from Charlton (both on loan),and JP Kalala on loan for the rest of the season.
Newell's is steadily putting together his own team. I should think there'll be a decent crowd at Blundell Park today. I wish I was going. Stupid lack of money.
UPDATE: It's been called off because of a frozen pitch. Another week unbeaten.
Posted by A layer of chips at 06:33

Now you can save up for the rearranged fixture.

I hope we don't have all that games in hand shit. I hate that. Mind you, everyone's game is cancelled, innit?

Aye, same for everyone.

I've been scanning all the non-League games round here in an effort to get out of the house, but they're all of as well. Pub it is, then, I guess. *sigh*

Please read it, and add your comments, send us any other topics in and around GY that you think we should cover
Pass it on to your friends