The School let it slip 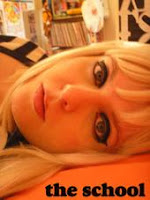 Liz from The School told me earlier today that they'll have a single and album out later this year, which is ace news, isn't it?

The single is out around May time, and the album shortly afterwards. I'm sure they'll be playing loads of dates around that time, so it'll be worth keeping an eye out. in fact, they're always playing, so keep both your eyes out.
And I defy anyone not to have a wonderful time when watching The School. A particular ramshackle evening comes to mind, when the band were playing with Saturday Looks Good to Me and Horowitz and the bloody awful Stealth in Nottingham a couple of years back. Horowitz had just played one of the most drunken sets I'd ever seen, and Saturday Looks Good to Me were just dull. On came The School and were so charming that most of the 20 people in the audience fell in love with them. Sigh...
Go, on have a listen. They're one of those bands that can't help but write nifty little pop songs.
Posted by A layer of chips at 20:31