I hope everyone is preparing themselves for London Popfest this week. Me, I’ll be overseeing the Sourpatch gig on Thursday night with comrade Andy, then heading down to the big city for Saturday and Sunday. Should be fun on a grand scale.

Not so much fun for my friend Rob who is currently awaiting an emergency evacuation flight from Tripoli so he can be at Popfest. Good luck, Rob.

Amongst the turmoil all over northern Africa and the Middle East, the pop continues from Spaghetti Anywhere whose free ‘Arrochar’ ep is now available for download.

Fans of the early Wake stuff might want to sit up and take notice for a few seconds, because ‘Nice to be Nice’ really, really sounds like them. A gliding pop gem that inhabits the space between your ears for more than a few hours after you’ve first heard it.

‘Kevin Currie’, meanwhile, takes a more folk-y slant, and is the sort of nursery rhyme pop that seems right up my street on a Monday lunchtime at work.

So, amid the chaos there is calm. See you on Thursday in Nottingham, and in London at the weekend.
Posted by A layer of chips at 16:53 1 comment: 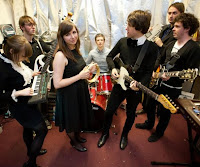 The Loves, then. More members than The Fall. More tunes than most. And more fun than most pop music over the last ten years. See you later, comrades..
Posted by A layer of chips at 18:38 No comments:

I am in love with I Am In Love

Life has taken me towards something of a synthpop obsession over the last couple of weeks, for one reason and another, and the latest auteurs of this genre are Leicester's I Am In Love, who sound like my childhood.

Always simmering in the background are the sounds of mid-'80s pop, with The Associates, Japan and even Bronski Beat obvious influences. Not since Echoboy in the early part of the last decade have a band managed to take that sound and make is sound so modern. This is pop music with a dramatic, epic edge, that suits me down to the ground at the moment.

You can listen to a couple of I Am In Love's minor masterpieces at their Soundcloud page, here.
Posted by A layer of chips at 10:50 1 comment:

Hey, have a look at the new Eux Autres video. You know you really should go and see them.

Date for the Diaries

Just to say, that if you're missing Red Shoe Diaries and you haven't heard their new song just yet, then you should listen to 'The Love That You Read About' on bandcamp. It's dreamy.

Then go and see them at The Lexington tomorrow night with Allo Darlin'. 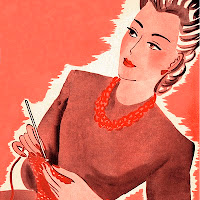 Some bands manage to knock out a couple of great singles - an album at best - and then disappear, or struggle to come up with anything anywhere near as good. Horowitz, on the other hand, are dripping in pop tunes.

Nottingham's best band have a new cassette only release on Fika Records, the cassette-only imprint run by Tom Ashton. It shouldn't really matter what you think of cassettes or whether anywhere still sells cassette decks these days, because the three songs on 'The Knitwear Generation' are joyous.

The title track is the best song I've ever heard about cardigans, but can we just skip onto 'Summer Promised Me Too Much', please? Because it's probably the best, most affecting song Horowitz have ever written. Lying somewhere between the heartbreak of Brighter and the sonic beauty of early Ride or Pale Saints, it's the sort of song that you'll play ten times in a row without realising it. And just when you think it's dying away, it takes off spectacularly again, before leaving you hanging onto a shimmering chord. I'm just about to play it again.

Oh, yeah, and 'Play Me Your Song' is pretty good, too. A straight down the line pop romp, with some Pavement-y bits thrown in for good measure.

If you can handle the cassette format, then Fika is a label to watch. There's also releases from Moustache of Insanity, Lisa Bouvier and Lost Summer Kitten coming your way. Find out more here.
Posted by A layer of chips at 12:53 1 comment:

There's a riot goin' on 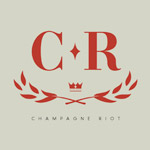 You might want to question the BBC's unflinching inability to question the official line being pushed out of Egypt at the moment, and not think for a second that Mubarak's goons in the army might just be the plain clothed "supporters" who are killing hundreds of protestors in Cairo right now as I type this. I couldn't possibly comment.
But whilst the Western governments carefully try and manipulate proceedings in Egypt, there's an altogether more serene riot occuring in Denmark.
Champagne Riot might be a pretty terrible name for a band, but when they write an ep as dreamy as ‘Moonstruck’ you can almost forgive them anything.
What you get here are four drops of synthpop beauty. The title track soars and sweeps and has a chorus doesn’t so much take glide off and erupt vertically.
‘Heart Stab’ takes the title for the song that’s mostly likely to be in your head for the next six weeks, depriving you of sleep and making you want to wail along like, oh - I dunno, a pretentious teenager.
‘Goldrush’ is almost choral. It’s quite something, listening to something this powerful and wondering how it can come from just two people.
Last up is ‘A Friend of a Friend’ - four minutes of delicious melancholy wrapped around a simple keyboard part that doesn’t just tug at your heart, it rips it out and plays football with it.
The music here is massive, yet the lyrics deal with a kind of world-weariness it’s hard to find elsewhere. And I like a bit of that now and again, don’t you?
You can order ‘Moonstruck’ from the Matinee Records website now. And, frankly, you’d be a bit daft not to. Whilst you're waiting for it to arrive through the letterbox, the ep is streaming on the Champagne Riot website.
Posted by A layer of chips at 18:36 2 comments: