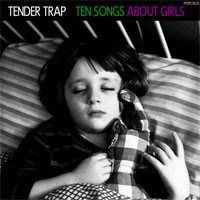 Tender Trap's 'Step One' single is out on Fortuna Pop! today, and you really should all buy it. It's a big, brash romper stomper of a song, with humour, attitude a hook that worms its way into your brain FOREVER. Well, the last three weeks, anyway...

Anyway, 'Step One' is Tender Trap at their most confident best, as it taken from the equally life-affirming album 'Ten Songs About Girls', which is also out soon of Fortuna Pop! Yeah... soon.

If you're missing Indietracks (and who isn't it?), then take at look at the video for 'Step One'. It makes me want to stop doing this stupid job, shut down my computer and head out for fun forever.

Before I disappear to Bournemouth for the weekend to appear on the set of the most forced fun you can have at a family barbecue, I'd like to share the ace new video by Eux Autres, a band who make quite the best rattlebag garagepop.

This video is all kinds of brilliant.

Whilst I'm wandering around in a daze at how brilliant the upcoming Tender Trap album is, I thought I'd better tell you about a Christmas party we're putting together in Nottingham.

After falling completely in love with Young Romance (only half apt) at Indietracks this summer, I've invited them to come and play in Nottingham and they've only gone and accepted. Joining them are the lovely feedback pop of Fever Dream and the mighty Tigercats, who are making their Nottingham debut after what seems like forever. It should be quite a party, but it clashes with the Big Pink Pop do on the same night. Sorry, you lot!

DJing will be Kevin from the Felt Tips, who also have a new album recorded to follow up 2010's ace debut.

Here's some videos of the bands:

It's gonna be ruddy brilliant.
Posted by A layer of chips at 15:06 No comments:

Just in case you were in doubt that The Hobbes Fanclub's 'Your Doubting Heart' wasn't the best single to be released for AGES, then here's a beautiful video to go with it.

This song, along with it's completely beautiful reply, 'The One You Love' have accompanied me to and from work this week, as well as in the car and, lastly, the bath. Hang onto that last thought, Leon and company.

Watch this, and then buy the single immediately from the Shelflife website. 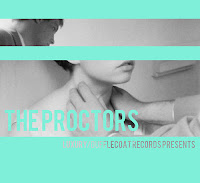 Dufflecoat Records, the perennial outsiders of a scene already outside of just about everything else, have been putting stuff out at an alarming rate over the last couple of years. CD-Rs have been a speciality, but this is a beautifully packaged indiepop seven inch single on vinyl so thick you want to bite it.

The Proctors have come back from the dead over the last couple of years after skirting around in the early 90s putting out some sublime pop music on Sunday Records (if my memory serves me), and it's a joy to have them back. They're even playing live these days.

Their two tracks here are probably towards what those Americans called 'dreampop', which is a fair description when it comes down to it; it's really way too upbeat to be labelled 'shoegaze'. 'Fun Sunday' is both sad and happy at the same time. The maudlin mixes with majestic, uplifiting, chiming guitars and a vocal from Margaret Calleja.

Having said that, 'Adrienne' is pure shoegaze, and could easily fit on that first, mighty Slowdive album. It brings back hours spent with in my bedroom with that record and a cheap bottle of red wine. My, I was the most bohemian man on the planet back then. Oh, yeah.

Apple Orchard are still around, and still making a quite beautiful sound. Taking their cue from the noisier stuff on later Sarah, and bands like Moose and Revolver, theirs is a dirtier, less glacial pop sound, but none less brilliant. 'Not This Time' fair grinds along, but it's 'The Early Riser' which shines brightest, with its carefree, lolling guitar riff and almost funky drums. It's way better than I've made it sound, don't worry.

I've got a few more new Dufflecoat releases to listen to over the next few days. If they're all as good as this one, I'm in for a treat. So are you, like.

Rather typically, I find another ace band as soon as they're about to split up. And so it is with Sauna, from Denver, who come highly recommended by the godlike Orca Team.

Sauna are the snotty little sisters and brothers of Orca Team, making a rougher, yet lighter, surf pop sound. Whereas Orca Team are perfect to drown yourself to, Sauna make you want to kill yourself in a high speed road accident.

Alas, they're about to kill themselves in a massive pile-up of a last gig in Denver on Friday 17th August. If for some reason you're reading this and you're in the vicinity I'd go along, call me, and let me listen to another slice of pop perfection slip down the shitter.