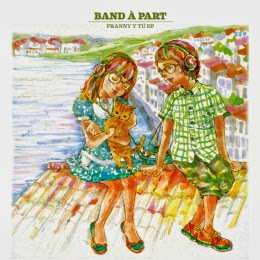 There's been a rash of Indietracks-inspired videos over the last few years, and, indeed, if, for example, you've skived off work for the weekend to be at the world's best music festival, then you've got to be a bit careful you don't get caught on a Super 8.

Band à Part were at this year's Indietracks with their recording equipment, and they've made a very cute video to accompany their charming new single. 'Franny Y Tú' twists and turns all over the place, but never remains anything less than the sweetest pop. Musically, it takes a lot from those Siesta bands of yore, but with a little more edge, whilst the international pop underground that were part of the Shelflife milieu in the late 1990s and early 2000s are an obvious influence.

As summer fades into Autumn, it's songs like this that make the absence of those longer days a little more bearable. Close the curtains, eat some chocolate and put this on your record player and life will still be sweet. Oh, and 10p to anyone who can spot themselves here... 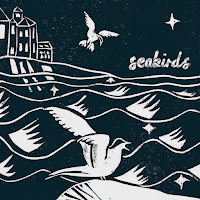 Oh, to be in at the start of something special.

The genesis of this single seeing the daylight might well have been a semi-drunken conversation in The Dragon pub in Nottingham one late afternoon earlier this year. Ian Evans of pop tigers Horowitz and I were on one of our regular mid-week pub trips during which we get progressively pissed and try and put the world of football, music and politics to rights. We almost certainly talk complete nonsense.

However, this one particular afternoon, Ian let slip that his new band, Seabirds (which he'd formed with the remains of Red Shoe Diaries) had recorded a couple of songs in double quick time. He said he'd email me the demo when he got home, and that the band were looking for label to put the songs out on.

The rough cut of 'Real Tears' was stunning, and I hooked the band up with Jimmy at Matinee. The rest is a mystery...

'Real Tears' is a storming debut; a dark tale of love, the certainty of death and loss set in the north of England. Like the best Guild League songs, it takes in numerous locations, and has a middle bit that borders on the funky. It's like Tindersticks after they've won the lottery, like The Lucksmiths had they grown up in a decaying British industrial city rather than the scorched south of Australia. Its lyrics remind me so much of when I lived on the dole in Nottingham in the mid-90s, and the trials, tiny triumphs and tears that time brought.It's a triumph of five people capturing a moment and time in three minutes, like all the best seven inch singles.

On t'other side 'Oh Buoy', in which Tom whispers a love song to a near perfect-pop backdrop, with Leanne's harmonies and Ian's guitar weaving a beguiling spell. Ian even breaks out a guitar solo at one point, and you can almost imagine Seabirds playing to a couple of thousand people. It's the more instant of the two songs, but there's no hierarchy here - just two songs on one quite glorious debut single.

The lesson of all this? Go to the pub more often, obviously.
Posted by A layer of chips at 07:24 No comments:

If anyone is best-placed to comment on the vicious by-products of capitalism, then it's Athens-born Giorgos Bouras, who has seen his home city under attack from both the neo-fascist Golden Dawn, and a spineless coalition government who seem intent on encouraging the rise of the far right.

Now based in Edinburgh, Giorgos and his (very) Occasional Flickers have a new single out on Cloudberry which rails, in a most arch way, against consumerism and how it affects us all. It features a heroically shambolic guitar solo that only makes me love the song even more, some of the best scratchy, jangly guitars I've heard for a while, and an organ part which brings back the very best of early Comet Gain.

We often bemoan the lack of political pop music being made in these terrible times, but The Occasional Flickers have chipped in with a minor classic of the genre. Okay so it might not stop the carnage currently sweeping the majority of people asunder, but whilst songs like this are being made, hope remains. File under: defiant.

This time next week, I'll be really quite drunk and listening to Fever Dream at the Nottingham Pop All-Dayer. Will you? There really aren't that many tickets left now, and there'll be even less on the door, so make sure you're there to be in with a change of appearing in the Nottingham Post photos of the gig. How can you resist that, eh? 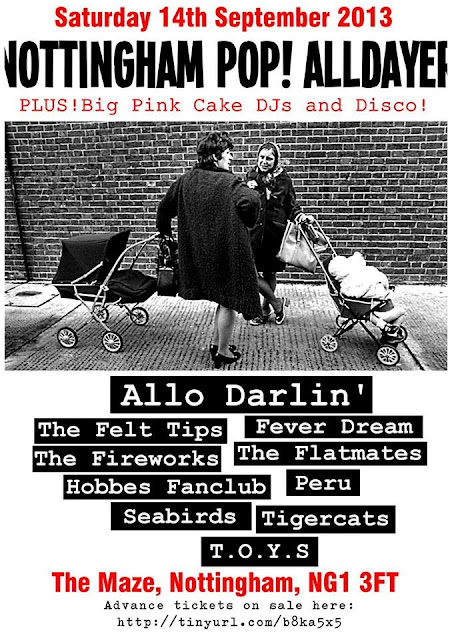