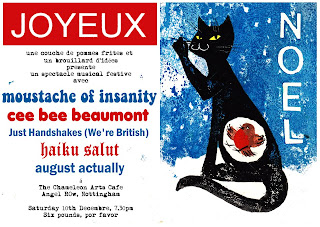 My good comrade Andy Hart of a fog of ideas has done a most festive flyer for our upcoming Christmas gig (details on the right there).

If the John Lewis advert featuring a slightly misguided Smiths cover doesn't whet your appetite for eating your body weight in meat and chocolate, whilst drinking stuff that would never normally pass your beautiful lips for the rest of the year, then we hope this flyer will.

Matinee Records have dipped their toes in the ever fertile Swedish pop pool again, and are set to release the new Azure Blue album, 'Rule of Thirds'.

Azure Blue, as I'm sure you're aware, is the solo project from Tomas Isaksson, ex- of Labrador bands Laurel Music and Irene.

Matinee have been good enough to release one song from the album, called 'Catcher in the Rye' - a kind of melancholic synthpop whisper, which brings to mind a downbeat Fosca, and that's no bad thing, now is it.

I'm presuming these two tracks are going to be singles, as there are videos for them, but who knows? Whatever, they're both pretty ace.

Azure Blue - The Catcher in the Rye from Jonas Börjesson on Vimeo.

You can buy the album, which is out on January, on the ever-ace Matinee website. Treat yourself to an early Christmas present.
Posted by A layer of chips at 15:18 No comments:

Kissing Orca Team on the face

Just when I thought I could relax and spend the rest of the year listening to old records again, along comes Orca Team's 'Kissing Cousins' ep to keep me on my toes.

Don't even listen to anyone who mentions The bloody B*ach Boys in the same sentence as Orca Team - for they are talking massive amounts of nonsense. Oraca Team make dark surf pop, and 'Kissing Cousins' is a 21st Century death disc masterpiece.

Orca Team have clearly been brought up on a deeply healthy diet of John Waters films and obscure '60s surf bands. The singer sounds like a young Ian McCullloch in parts, and all of these things thrown together over eight bursts of woozy pop perfection makes for one of the records of this year, last year - of any year.

I'm still too wrapped up in this record to offer an kind of reasoned critique of why it's completely essential, suffice to say that it just is.

Also, if this isn't the coolest thing you've ever seen, then you have kitten piss for blood.

This is a band that clearly likes its shorts, and I'm totally cool with that. 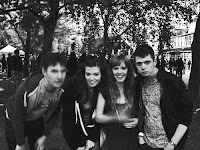 Colour Me Wednesday are from Uxbridge, and if I've heard a better new band this year then I've been lying to myself.

Colour Me Wednesday are (probably) frighteningly young, but then that means they make the sort of cocksure pop music that makes me shiver a bit.

I know next to zero about this band, other than to thank the anorak forum for making me aware of them. I want them to come and play in Nottingham pretty much every night of the week for the rest of the year.

Everything about this song - from the title right down to the toy drums is perfect. I demand you play it around 20-25 times in a row.

If, by some miracle, the band read this - then please get in touch sharpish. I'm deeply EXCITED.
Posted by A layer of chips at 19:38 1 comment:

It's that time of next year again...

Traditions are sometimes a wonderful thing to stick to, and so at the arse end of February I like to meet up with my mate Rob in some overpriced pub in London, get drunk and head to the Saturday and Sunday of London Popfest.

There have been five bands announced so far, and I love all of them. Allo Darlin' will headline the Saturday all-dayer at the 100 Club - a legendary venue (legendary for its extortionate beer prices), whilst the amazing Tunabunny and spunky Tigercats are also playing. One Happy Island are coming over too, whilst pop terrorists Shrag will headline the Friday show.

The whole thing runs from Thursday through to Sunday, and you can buy tickets here. For now, here's the latest video from Tunabunny. I've spent the past week listening to the band's new album, and told HHBTM Records chief Mike Turner that it's a real "grower". Apparently that means something rude in America. Trust them!