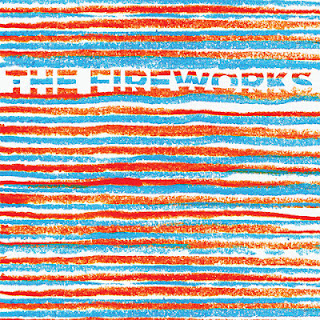 The debut single by The Fireworks has been much-anticipated around these parts. Whilst there might only be one track available to listen to on Shelflife's website, it's the track of their lives. And yours.

'Higher and Higher' might echo the sounds of The Flatmates, Shop Assistants, early-JAMC and the rest, but it's pop music that is very much in the NOW. It's a song that races through your veins - the sort of thing you'll hear in a club (if you still go to clubs) and immediately race to the dancefloor to enjoy two and half minutes of pure pop adrenaline.

This song aches with vitality. It makes most of the rest of what's around at the moment seem like adolescent dicking about. I'm in danger of going over the top here, but if the other three tracks on this record are of the standard of 'Higher and Higher' then this could be a very important release indeed. That sentence sounds a bit mucky.

You can listen to 'Higher and Higher' and pre-order The Fireworks ep at the Shelflife website.

Ah, how they've grown. From mere striplings peddling sometimes-ace, sometimes-average indiepop two years ago, Just Handshakes (they've dropped We're British, it seems) have come back with a song that fair screams "We've arrived!", and not just in London.

This single, which is being made available as a free download on 18th February, is a taster for debut album 'Say It', out on Bleeding Gold later this year. If they sound as half as good as 'London Bound', then we're in for a treat.

I can't work out whether it starts out by sounding like 'I Could be Happy' by Altered Images, or 'Ceremony by New Order. I'm assured by those older and wise that it's the New Order song. From them on it just flies, with crackling, crashing drums, a big, dirty guitar solo, and a vocal that's so very happy to sing a long with it all.

It's joyous, to be honest - the sort of song you want to be listening to as your train speeds through the countryside towards the one you love, or the night out you've been looking forward to for weeks. It's Just Handshakes coming of age. 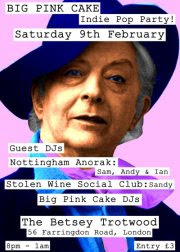 Being too busy with Real Life Work is putting pay to proper posts at the moment. However, I'm escaping the spare room tomorrow to get a jet train down to London to DJ at this. If you're around, come along as say "hello". More information here.

Big Pink Cake put on ace events, and the Betsey Trotwood is a lovely, lovely pub, so I'm really looking forward to it. See you there, maybe.

What you really need to know about last Saturday's Spook School/Milky Wimpshake/Sweet Nothings/Understudies gig was that it was one of the most precious evenings I've ever had at a gig in this city. The fact that it was topped off by Ian from Horowitz going so crackers to Milky Wimpshake that he fell over their monitor into Pete Dale only made it even better...

Here's a few photos courtesy of Andy Hart, of the merry goings on in the crowd. If you'd like to see some of the real stars of the evening - the bands, then Andy's taken some more, here. 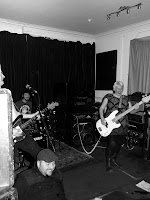 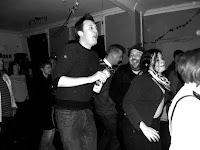 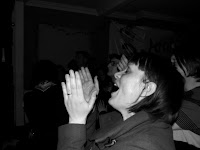 Meanwhile, people are getting a little bit overexcited about the Postal Service gigs in London and Manchester. I'm sure they'll be amazing shows, but that music, for me, was a little bit too associated with a time and place that I don't need to be reminded of again. Have a lovely time if do manage to get tickets, though...

Well, where did this band come from? It seems almost a tiresome cliche to be obsessed with Scandinavia in indiepop circles these days, but when self-obsessed Scandophiles Finnmark make admit to it you really don't mind, so brilliant are their first three songs.

Finnmark. from Leeds, make darkly, desperate, romantic pop music teeters on the precipice between soaring off into the sky and falling down in a hopeless heap. There's no magic formula at work here, just a seemingly innate ability to write almost dreamlike pop.

The pick of the three for me is 'Through a Glass Darkly', which I presume is more about the Swedish film than the biblical reference, as the lyrics hint more than once at the plot. Alluring doesn't quite cover it.

If Finnmark aren't this year's next big/little thing on the indiepop scene, I'll start believing that Scandinavian social democracy really is the cure-all some people seem to think it is. Make this band your next port of call in the meantime.